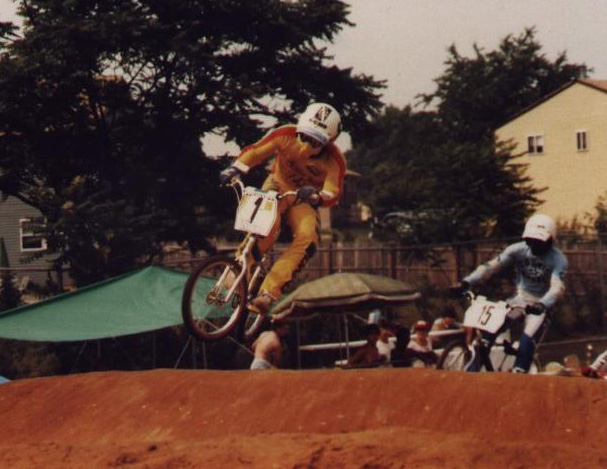 Brian Shute. In the mid to late 80’s a new wave of racers were coming into play in NJ. Brian was one of them. Hailing from the south NJ area, he was a local to Clayton BMX and Deptford. Undisputably one of the fastest riders to come out of NJ in that time, he would capture the then very hard fought #1 plate in ABA District NJ-3 (yes, NJ actually had 4 BMX districts in it) At nationals  he would hang with and beat the top factory ams of the day, like Charles Townsend, Kevin Hull and Doug Davis. A contemporary of Clay Goldsmid, Shute would go on to turn pro and do very good getting the #28 national plate in the ABA in 1987. I was lucky enough to spend over an hour b.s.ing with Brian this past Friday and got all kinds of great stories from his time in racing. (well… I sorta guess that’s what racing does, it creates those great stories!) What follows below is a little bio we cooked up to share with everyone about one of NJ’s fastest riders to come out of the late 80’s, Brian Shute.

The question that I ask everyone, where, when and how did you learn about BMX?
I had grandparents that lived in Millville. There were 2 kids near her that raced and I used to ride with them on the streets. One was a kid, I think was named Mike Kozak/Kovak and the other was named Steve Lauser. I also used to ride around the street bunnyhopping trash cans and kids so my father said if I thought I was so good I should try racing. So he took me to Clayton & Deptford to see a race and shortly after that I started to race.

How was your first race and how did you place?

My first race was a 3rd. Then the next 3 were first’s so I moved up to novice. The I think I won a few and then I turned up to 15X.

What was your first race bike?
Mongoose, Supergoose, then onto a GT.

Did you look up to anyone when you first started?

Not any one single rider. I respected any of the fast older racers and watched them and tried to learn from them all.

What track did you consider your home track?
I was pretty much in between Deptford and Clayton. Me and Clay Goldsmid designed Deptford in early 1986.

Who was your local riding crew?

I didn’t really hang out with any single group. I did go to a lot of other racers homes to ride. I rode at Clay’s track often, but mostly road to other towns to see girls and practice at the tracks.

Who was your comp at the track in your AM days? Locally…Nationally.

The list is long as there were a lot of good riders in my class. Plus I travelled all around to North Jersey to race and also down south into Delaware and Maryland plus out into Pennsylvania.

When I first started it was guys locally like, Larry Shute (no relation), Jim Dahlen, Rodney Demore, Warren Muller, Joe Layton and Dave Thompson. Up north guys like Jarrett Justice, Mark Lopez, Chris Williams, Marlon Pearson, Dave Campbell, Ken Aman, Billy Sargent, James Vincente and a slew of fast guys. Out in PA, guys like David Clymer and Guy Steves. Down South guys like, Derrick and Jay Reese and Jeffrey Allen. Nationally it was whoever was at those races. At one point I was flying and racing with Charles Townsend, Kevin Hull, Terry Tennette, Todd Slavik, Shawn Carmody and others at nationals.

What titles did you get during the am years?

I won the Delaware NBL#1 Title for 3 year 84-86.  Got the number one plate in NJ-3 for 1984 and 1985. The next year also won the the spring, summer and fall thing the ABA did. Won a bunch of Gold Cup Qualifiers and State Championship races sin Maryland, New York and PA. Tripled at the NJ East Coast ABA National and the North Carolina Tar Heel ABA National.

Who were your sponsors through the years?

Pedalers East for a  few races when I started out until Dic’s bike shop picked me up. Then the year I got the #1 plate Action Wheels approached me with a deal I couldn’t pass up. Beacon for a few NBL nationals only for team trophy. Got a small factory ride with TRS/Prime. It was ran by a guy named Dave Little in Kansas and a old Cali pro named Greg Turnage. Also Scott Clark made the pads and outfits. And then I went back to Action Wheels and went Pro.

What made you decide to make the leap?
Locally the expert class was dead and I just came off my best year.

How long did it take to get to the A pro class?
In the ABA it was only one class then, the nationals were small. In the NBL I stayed B Pro since I didn’t race a lot of them.

What was your first A pro race like?
It was against Ronnie Anderson, Neal Allen, Mike Miranda, Joey Queen, Kevin Adelotte, Cory Collum and Keith Townsend… I made the main and got 5th.

Who was your main comp during the pro days?
Pretty much anybody and there were some fast guys out there. Locally, Jarrett Justice, Dave Clymer, Joey Queen and Neal Allen. Nationally all the pros at the nationals, Charles Townsend, Craig Seibert, Tom Kiniyalocts, John Anderson, Mike Poulson.

Most memorable main as a AM?
ABA summer national Elkhart, Indiana with Charles Townsend, Shawn Carmody, Kevin Hull and Todd Slavik. I got a 3rd and a 4th. ABA Low Country National, SC. I beat Doug Davis, Jim Wahl and Darren Martin. Tripling at the ABA East Coast National and the Tar Heel National in North Carolina

Most memorable main as a pro?
I would have to say the 2 against Ron Anderson. He was the smoothest pro I have ever raced against. After beating him at Deptford in a couple races, I saw him in South Park Pittsburgh. He said “You’re at my track now!”, I said “ I’m a B pro and don’t race you”. He was shocked I gave him so much trouble last time we raced, so we hung out all weekend in South Park in his new ABA Mustang at an NBL race. He was a mess, LOL!

Person who influenced or helped you most during your time racing?
My father and all the guys faster than me pushing me harder.

When did you decide to hang up the pedals?
This is vague to me, since I think I just wanted to be done with racing but, the ABA and racing was on a down spiral. My last race was at a 1987 East Coast National.  I raced Saturday against Mike Poulson of Schwinn, slipped a pedal, lost, got mad and didn’t go to the Sunday National in North Jersey. That was all she wrote.

What are you up to today?
I run a small commercial and residential tile contracting company…..why do you need tile done? HAHA!

How do you feel BMX helped you in your life?
It just gave me a outlook that I could do anything I put my mind to. Plus just knowing that I was of the BMX breed made me a little bolder in whatever I did.

So that’s a little with Brian Shute. If you remember the man hit him up as he is sometimes chilling in the forums reminiscing about the 80’s and having a good time.