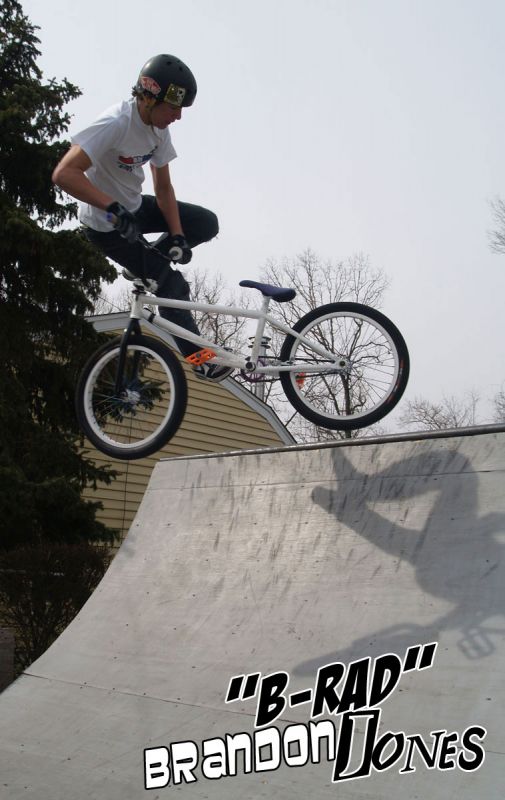 The scene in the Somerset County area has really taken off over these last few  years with a huge group of locals who are tearing it up out there and are “making it happen”, in an
area that I once called home. With Ken Cornell’s Wheelpark in Somerville at the center of the mayhem one family of BMXers has stood out to help the scene grow by leaps and bounds. The Jones. Led by the ever enthusiastic “Wild Bill” Jones this trio of BMX lovers has been promoting and helping the S.C. area these last few years. Bill helps manage the Somerville Park as well as running the “Crazy Bill Jones” contests that have been going down with more frequency lately. His sone Brandon who once looked up to a lot of NJ’s top pros is now a shredder himself throwing down huge tricks at comps from Somerville to Hackettstown and everywhere in between. The glue of the family, Anita “air it out boys” Jones, supports the craziness that the men in her life get into fully. She can always be seen volunteering at the comps and helping out with registration and the unsung duties of the peeps who make this stuff all come together. When I asked her how she felt about watching Bill and Brandon do their thing on the ramp floor, she said, “Honestly, I close my eyes a lot of times when they are going for stuff. I support them!…But it still makes me nervous”. (Amazingly that seems to be a mom consensus because ‘ol editor Brett’s mom used to do the same thing during my race career! LOL) Props to the moms of the BMX world who put up with our craziness.

BMXNJ went up to the land of Jones crew and chilled with them to get an idea of where the scene is headed in the area, what these guys have been up to and to get some shots of them actually shredding it up.

The Jones household is pretty unique compared to a lot of “Middle America” homes. A 5′ tall spine ramp is in the driveway that is followed by a 7′ sub ramp. It’s a killer practice area to have a good time on and get warmed up for shredding the park be it Somerville or Shields. 46 year old “backflipping” Bill shreds the guitar as well as he does the BMX and showed me a few
rifts that he has been working on. Bill is looking to get his band back together and word is out that they may be performing at Steve’s Jump For Joy at the end of the month. Hella. There’s a lot more to the average BMXer than just hitting a jump and mixing it up on the bike, multi-faceted barely touches the surface of the words you can use to describe these guys. Brandon is all BMX. Bill gave me a tour of the house and when we stopped at Brandon’s part of the Jonestead, it was BMX’d out. Live to Ride adorns the walls of his room
and BMX was all over it. The young dude does live to ride and it shows in not only his riding ability but his willingness to never give up until the trick is pullled.

After we sat and b.s.’d for awhile at the launchpad there for all the Jones BMXness, Bill asked if I felt like taking a ride up to Shield’s to get some footage there and maybe grab a few words on camera after the session. I was all about it so we jumped into Bill’s truck and wailed up to Shields ramp parkorama for an afternoon jam.

Brandon and Bill tore the park up with some great moves that had the young grom skaters in there pretty stoked as well. Bill (just off a sweet shoulder reconstruction about 3 weeks ago) popped out with a flip on the back ramp, proving to the kids that your never to old to BMX. Brandon was tossing down some crazy stuff as well and popped off a nice double whip and super man seat grab to round out the sesh. Brandon also has the decade air down. Probably one of the most un-natural looking tricks out there and definately one of the hardest. For those of our astute readers who are heading to Hacketts for the Jump for Joy comp, you may want to keep an eye out for Brandon to pull that one out during this runs up there.

BMXNJ headed off into the wild blue yonder after a quick bite to eat with Bill that afternoon where he told me about big plans for the 2009 Somerville Park and even bigger plans for an even bigger facility in the Somerset County area.

Check out the pics from we shot on these pages and in the photo gallery here.

We’ll also have a video up in a few days with some trick highlights from the Jones boys, (ok they’re men, but it just sorta sounds cooler that way…editorial leeway ya BMX dawgs! LOL) and some encouraging words from the main man himself “Wild Bill”.

With people like this (and there are more like them in the area that I will be having up here in the coming weeks) heavily involved in BMX around that part of NJ things are looking good for the whole sport!
Get ready BMX mongrels it looks like 2009 will be the year BMX takes the lead and kicks it big time in NJ.