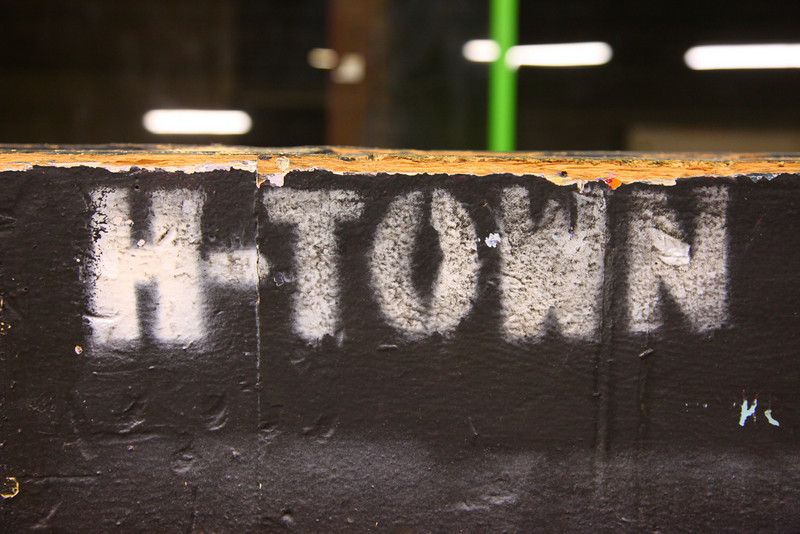 “HTown was more than a place for me. The friends I made there carried me through the worst time period of my life… I made a speech at bees to everyone about how I felt.” Dirk Lesko, 2010. One of Hackettstown’s great photographers.

“So many good times, so many cool stunts , creativity, knowledge, culture, and always was a positive time for me in the room.” Jim Dellavalle, 2010. NJ-PA BMX Pioneer, Off Road Cycling Advocate.

By now everyone in the NJ, PA, and NY area knows that the longest running indoor ramp park in our state, is closed. Word came down through the grapevine about a month ago that the owner was taking all the ramps down and moving on with other ways to support the building, as an indoor ramp park was apparently no longer a profit making venture. Strong words were said on various places around the internet and I am sure in private about the closing, but in the end no one can fault someone for wanting to make a profit off the building that they own. If a ramp park is not making the mortgage payments, the ramp park will close. It has happened before, even to me and it will, in the future, happen again to other parks that of which, I have no doubt. (Don’t take this as a rumor that other parks are closing, they aren’t. It’s just a reality of life in a capitalist society.)

Before I can eulogize the end of an era for a park that saw so much activity in the state, I guess, as usual, I have to relate my own personal tale of an early trip to Hacketts back…LOL, well back before I would say a few of the guys who may read this were even born or thinking of riding BMX. It was back in about 91 or 92 and Hacketts at that time was a new park just opened. BMX itself was in a recession of sorts and spots to ride were few and far between. Myself, well I was at the end of my career of being any semblance of good and feeling a bit weak on the BMX at that point. Around this time, Jim Dellavalle was putting together a little contest series called, “Jumpin’ Jim’s Jamboree”. He had already had one at my place to help out fallen BMX rider Jeff Crawn and had set one up at Hacketts for the Fall of one of those early 90’s years… I went up there with a couple buds, and got to practicing on the ramps…and immediately began to fall in complete hate with the jump box. As was with my overblown ego at that point in time and after more than a few dead sailors on the box, I blurted out, “Who built this sh***y” jump box?!” To which someone replied…Jim did…and Jim of course was…standing right behind me.

Yea,  yours truly felt like Johnny Jackoff around that moment. After sorta giving Jim a “I feel like a moron” look, I muddled through the rest of the comp, got my last place and headed on home.

What’s the point of that tale? Well two fold. One is to apologize to Jim for having a big mouth in my youth and downplaying all the hard work he put into helping build the ramps and the other is to show that you never realize how important things are till you don’t have them anymore.

Was it cool for me to say that about the jump box and it’s designer? Hell no. In my arrogance though I didn’t take into account how much effort is put into having a ramp park and all its associated costs…even though I had been running one myself at that point for almost 3 years.

Now here we are at the end of an era that has spanned from Jim Dellavalle’s original rider run series, “Jumpin’ Jim’s Jamboree” to Al Dimino’s “BMX Invasion Comps” over to Steve Wisbeski’s “Jump For Joy Comps” and the endless comps put on by the park owners of the years, Anthony P’s jams, the benefits and fund raisers for Jeremy Barcik, Joe Tiseo and all the amazing sessions that went on there. Hackettstown truly created a North Jersey scene like one that had not been seen since the days of BMX racing permeated through the area and tracks dotted the NNJ landscape.

“H town was a true staple of progression for me. Created the rider I am and aspire to be. Even if it was a shithole. You can ride hackettstown….you can ride anywhere ” Geoff Meade, Team LMNOP

Everyone has an opinion on parks, but the one thing we all agree on now, especially in light of Hackettstown closing, is that we are lucky to have people who are willing to put their savings and insurance liability on the line so we have places to ride. How different would the BMX scene have been over the past almost 20 years had Hacketts not been there. The riders that came through, fallen heroes like Barcik, and Tiseo. Business owner Ralph Sinisi. The North Jersey and PA locals who called HTown home. The countless trips up there for Jump For Joy when South Bound Brook wouldn’t let Steve hold them in his yard. Al Dimino and “The BMX Invasion”. The big pro purses that would be put up there for our local guys. It was not uncommon to see $1,000 bucks put on the line to see the guys throw down.

My mom worked at hacketts so i was there allll the time before i even picked up a bike. That place has been home for like 5 years now. Gunna miss it. Kyle Olinger, Future BMX Legend

HTown definitely had its share of ups and downs. LOL, hell, we’ve even seen punches thrown and fist fights go down in there! Crazy times, heat of the moment arguments. Now though, when you look back, all arguments or misunderstandings seem…pale in comparison to the fact that there is now 1 less place in New Jersey to ride a BMX bike indoors. Maybe now is the time to put in the past any ill will people had towards each other and work together towards the future that BMX needs in New Jersey. A future of everyone being on the same page, working together to grow a big BMX presence in a state where the riders know BMX is HUGE…but the general public is unaware that there is a national BMX champion and past world champions living right here. (yea we all know Garett R was Dew Tour Park Champion in ’09…did you know that flatland BMX’s first world champion was from NJ? Yep, Craig LePage…no lie)

Kyle’s Mom was cool. H town man, almost 2 decades worth of creativity. Has seen the invention of inline freestyle skating. tailwhips, mad technical bike freestyle, self proclaimed athletes from our tri state. The birth of Animal and Scavenger to name a few. Many many good times. From the original H town crew to now it’s always been certain that we hold a great bit of culture and creativity for all of our sports in the tri state. Jim Dellavalle, PA BMX and MTB Legend

The pictures that surround this little “requiem for a ramp park”, were taken by Dirk Lesko. I personally met Dirk at one of the comps up there a few years ago and was immediately taken back by meeting someone who was my age who was just as pumped about promoting the local BMX scene as I was. Another creative individual that had come from the Hackettstown culture Jim mentioned above. Dirk’s photos would always be up there on the net after the contests for anyone to look at or download, in full size, for free for the benefit of the riders. When it comes right down to what BMX is all about, creativity, and a go for it attitude always come to the top of the list.

Now as I sit here typing these words that say, “it’s officially over” for the Hackettstown era, I can begin to see the future of BMX up there in the North Woods of NJ. Big Diesel bike shop, the legacy of the Barcik’s will not be leaving…just relocating. The new riders and local teams that are coming up in the area will become the inspiration for another generation of BMXers. Then of course there is the question of just where are those trucks and ramps going in all o Dirk’s pictures?…

Ramp parks come and go, they have been doing it since the 1970’s in New Jersey with the demise of the legendary Cherry Hill Indoor Concrete Park (for real, click this link ) to NJ’s first BMX specific park, the Ramp-Ateria, up to A.S.S. in Toms River run by George Hoernig. All an ending means is that a new beginning is going to happen someplace else. With a park like Hacketts up there for so long, I am thinking that there will be a new park opening up there soon enough. This time though I have a strange feeling that everyone involved will make a place bigger, better and will bring with it all of the best parts of what made Hackettstown Skate Park a great place while leaving all of the old baggage behind.

Speed riding the park when it was a bit empty with Tiseo, Hallman, just about everyone could do the big lines at one point and when the high energy songs came on it was like being at the X Games… Jim D, need I say more…

In 1976 BMX became organized in NJ and people started to build facilities for guys to ride bikes, in the 35 years since, through ups and downs it has continued on. Judging by the past, the future of BMX in NJ is looking pretty good, even with HTown now buried in the same grave as all the rest of the great NJ parks.

Hackettstown is gone, but its legacy lives on.

We’ll see ya at opening day up at whatever new park comes into being up in North NJ.

(for all of Dirk’s shots of the “Dismantling of HTown”, click here )