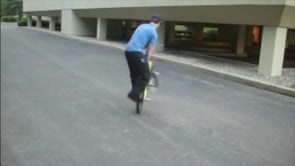 A user from the Global-Flat forum has come up with an online battle style competition. His name is Ondo and has made this battle competition a lot of fun. There are four classes, Beginner, Intermediate, Experts, and Masters. It has been set up into brackets by the one and only Mark “Rad Dad” Dandridge from Texas, who had a Top 5 on BMXnj a couple of months ago. It is a really cool opportunity to show your riding and be judged by people who share the same interest with you. Right now all the First Round battles are going on and there is a lot of great riding from everyone. I even entered in the Intermediate class and won the first round. I am now in the quarter finals, so we’ll see what happens. Check my video, the rules for the contest, and the brackets after the jump…

Rules from the founder:

Some basic rules:
1)I announce the first battle between 2 riders. From the moment there is a 4 day limit for those two riders to film and send the video links via PM to me! This rule is just for fairness, it’s nothing if you post it in the battle thread. When both riders have sent me links- I post them in the first and the last post of their group!
2)The video can be edited or unedited, but must be maximum 45 seconds long. When the first battle series in each group are over(8 battles), then the next round adds +15 seconds. So the lenght in series are:
– First 8 battles= 45 sec
– Quarterfinals= 1 min
– Semifinals= 1 min 15 sec
– Finals= 1min 30 sec
This is the maximum of video lenght- you don’t have to fill it up compulsory.
3)The run can consist of combos or just tricks, but if edited, they should be with ride ins and outs.
4)For each battle your run must be different.
5)It is forbidden to use old, before filmed videos.
New rules about the video lenght.
1)A subjective point, but I can “allow” the rider to finish his combo and do the ride out if it goes just <10 seconds more.
2)So then there is a question, which combo can be longer?
– The combo which is started not later than 15 seconds before the end of the run.
3) It is hard to tell, if the run is too long, because, it can really contain small tricks in the beggining and the long one combo is pressed in the end, to gain extra time. That will be not allowed too.
For example: If you got two combos: 26 and 32 seconds long. If you put them together in that order, then you get 58 sec and the combo did start 15 sec before the end(as mentioned before), but the main rule wich corrects it all: If your run is over time limit, it is allowed only then, IF THE LONGEST COMBO IS IN THE BEGINNING!
I’ll check every video and I’ll be critical about the use of extra time!
4)If the video contains title(something meaningful), the video can be longer as the title lenght
5) If the rider can pull a combo for all his given time in run, my judgement on the time allowed will be subjective and slightly positive on allowing using the extra time.
So what is the solution?
– First off, if some rules are disobeyed, I’ll ask to correctly repost the video(if only the 4 day period is still active). If not, the rider can be disqualified.
– There is another solution. If you don’t want to repost the video, you can still proceed with the battle, but if you surpass the time limit unpermitted, then you’ll recieve voting “fines”.
For the time amount you overspend, you’ll pay with votes.
<5 sec -10% votes
<10 sec -20%
<15 sec -30%
<20 sec -40%
and so on.
6)After both rider videos are posted or the 4day period is over- voting starts. Others watch both videos and vote.
7)Voting is active for 2days. The rider who recieves the most votes in 2days- winner.
8)You can vote just for one rider in a battle just once. Keep in mind it’s subjective, but try to be objective a bit. Stick to these principles:
a) bike control
b) originality
c) difficulty
9)As voting has finished, the winner of the battle is announced.
10) The winner countinues to fight in the finals(if they are). The looser fails. (There could be some additional battles later)
11)The next battle starts after the previous battle ends.
12)Remember to check out all of the gruops and vote, because one battle will happen in each class simultaneously
13)Some changes into limits or structure can occur.
14) The winners will recieve prizes (not known for the moment)
15) Questions please in the main signing up thread!
16) If you are busy, please let me know I can arrange your battles. The list of those who are busy is in the signing up thread!

My First Round Video: