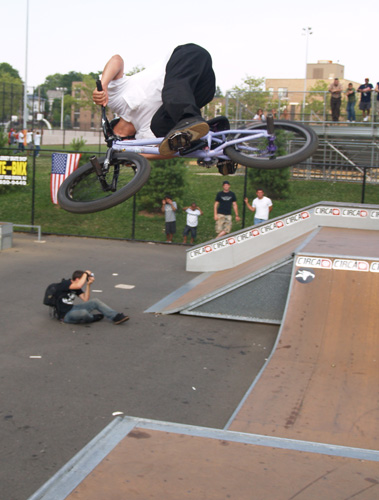 Ant-Dog quick…to the Brittle-mobile. Yea man, after the 4th NBL State Qualifier at HCBMX me and the Ant-Dogger bolted down to Perth Amboy for the first of 2 freestyle jams at the newly christened Perth Amboy Skatepark off of New Brunswick Ave in Perth Amboy. We got there just in time to miss the young guys and novice classes but were there for all the craziness of the expert class. All the usual suspects were involved, Al from CJS was the main perp, setting up the comp and getting the prizes together. Aaron the man on the mic, Mike running about doing the “keep it in order thing” and our usual assortment of strange people for judges. (Just kidding score givers!) It can be a real mind blower to go from a BMX race where there is a lot of structure and people stressing over stuff to a BMX freestyle comp where a LOUD PA system is basically in a public park (next to a lot of houses) and kids and adults alike are just enjoying the atmosphere and great riding. Highlight of the afternoon was Aaron announcing there would be single runs in the Expert finals and then having all the guys who made the cut say “Come on man, let’s use the jam format” and then having the guys running the comp say “Jam format it is fellas, you guys are doing the riding, so we gotta listen to you”. (Is dem racer types listening?, LOL) Big bangers of the top dog class? Fat whip transfers on the hips, big flips, an attempted front flip from a crazy short run in by Scotty Cranmer’s cousin. Whip 3 6 0’s over the spine and some sick fufanus and abubacas on the small quarter and wedges. I’m still learning who everyone is now in the world of freestyle BMX in NJ, so I’m hurting for I.D.ing everyone this time. (I think I need a freestyle correspondent!) Big thanks to the crew of CJS for letting me come out for the event and for pushing the freestyle scene in the area north of the Driscoll Bridge. You know BMX is getting HUGE in New Jersey when I have to run all over the place in one day just to cover events in the state. Oh and CJS is starting an army so if anyone wants to be part of this insane revolution there are some troops forming up over in Edison. See everyone again August 11th for Round Deuce, spoked in brothers and sistahs.