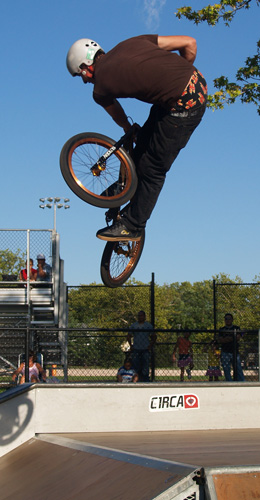 Round 2 of the CJS Perth Amboy Jam series went down last Saturday and bs.net went out to cover the scene. Al from CJS once again with his band of merry cohorts put on a killer comp with, again, no entrance fee for the freestyle lads in NJ. Al, Aaron, and Crazy Bill should be given huge props for their commitment to making freestyle BMX a big thing in their area. It’s people like them and the crazy riders that support them that make the NJ scene the best in the country! 2 classes made up the jam this time, the intermediates and the experts. Inters ran with about 32 riders in the class and x had about 20. Not bad for a local comp. Bill Cohan the local Fox Racing rep came out and viewed the days festivities. He was pretty impressed by the scene and looked to be pretty stoked on BMX in general. The comp went down fast and furious as usual with all the guys in the intermediate class really stepping it up. Attempted 720’s, fat nohanders, all kinds of crazytransfers and 1 dude pulling out a nice fat tailwhip…(which promptly moved him up to the expert class, lol.) These guys busted loose in the jam format and tore it up but in the end the judges put the crew of 32 badazzes in the following order: 3rd place to Shawn Greer who rode his whole run without a chain as it had broken off right before the beginning of the comp, 2nd was Steve “Nite Ryder” James, who was also killing it and 1st place went over to Mike “The Small Fry”. Mikey is just about the littlest dude entering the comps in NJ these days and he was pulling some mad transfers amongst other crazy tricks. Mikey is also one cool dude. As he was accepting the swag for the first place run he kept telling Bill that he didn’t deserve to win. That’s a kid with a small ego and tons of talent, good to see guys like him out there. The expert class was up next and with guys like Nikko, 1I Joe, Spanish John and Chris D-bag in the line up it was sure to be a crazy show. What went down in expert? One of the cool things I noticed about these guys is that they don’t just worry about doing whatever trendy trick is happening at the moment. They are all more into doing their own thing with their own style. Joe is the master of the leary-lookback-turndown, Nikko fires out inverts almost upside down and the rest of the men of x-pert all stand out from each other with distinct ways of doing their tricks. No disrespect to the intermediate class but there was definately a big difference between them and x-pert. The big guns are really stepping it up as the year rolls on. Highlights of the x class included Joe hitting some newly learned tailwhips over the hip, crazy backflips onto the deck by a couple guys, and an attempt to jump and clear the whole distance of the mini-ramp. Unfortunately I didn’t get the guys name who went for it, crazy as anything though! Al is saying they are having another comp planned for South River soon and are looking to get something going at Crazy Bill’s local park in Somerville. So stay tuned to CJS and bs.net for more BMX freestyle insanity for the NJ Scene!