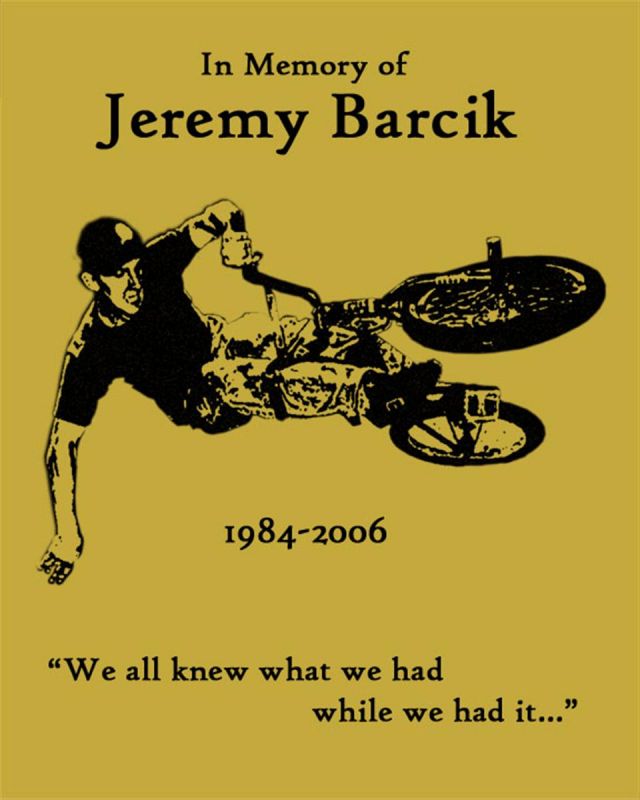 The 2008 Jeremy Barcik jam went down on November 14th at Hackettstown Skatepark. Over 90 riders
plus too many BMX enthusiasts and Jeremy’s brothers and sister, Mark, Jesse and Keri showed up at NJ’s longest running indoor ramp park to show respect to another of NJ’s great riders who have since moved on to that BMX facility in the sky. Jeremy Barcik was another of the great North Jersey Locals who shredded any obstacle that happened to be in front of his BMX steed at the time. He was taken from the BMX community in 2006 at the way too young age of 22. Every year now H-Town skatepark has held a jam-benefit in Jeremy’s honor and this year was no different. Over $900.00 dollars was raised and in true BMX rider fashion, was donated to help another rider in need, Stephen Murray. Yep, readers and readettes, all money was donated to the Stephen Murray fund. A good time was had by all the riders there and there will of course be another jam next year. H-town has a bunch of KILLER photos from the jam on their site as well as tons of stuff at one of NJ’s Premiere Extreme Photographers and all around good dude, Dirk Lesko’s site. Links are below to all the shots. Dirk was good enough to allow me to drop a couple of his shots on the site here to let you get the feel of the event. Props to all the riders, H-Town, BMX lovers and Dirk for all the good stuff they are doing for the BMX community. Look out ’09!