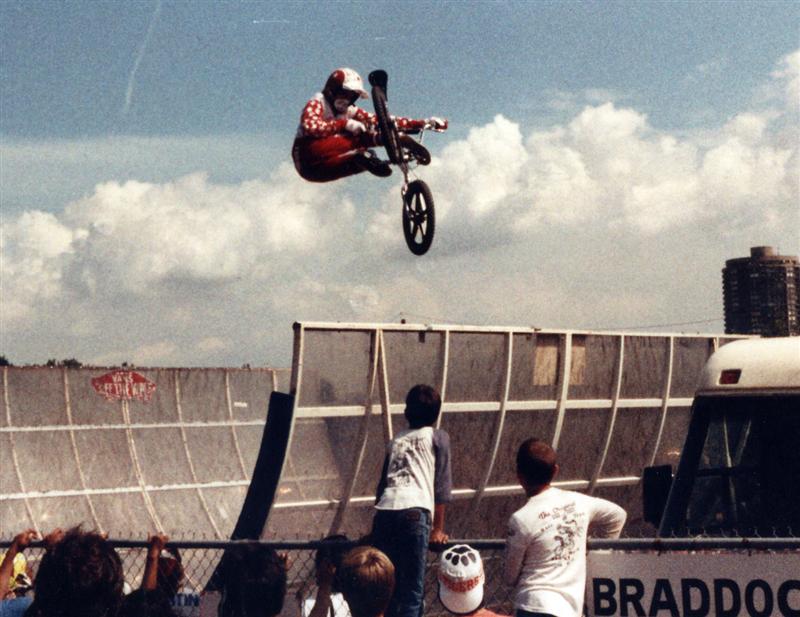 yea…1984 was a heavy year for freestyle BMX teams invading New Jersey. It seemed like every week a new tour was hitting a shop in New Jersey. But one team had their work cut Martin early cherrypickerout for them. The Vans Freestyle Team. JV Bicycles brought them in (at the time JV was killing it in the Vans selling scene) and since there was no real space at the shop to have ’em do their thing, they instead had to ride in the rugged badlands surrounding the track and the flatland guys, Martin Aparijo, (then riding a Torker Freestyle Bike) and Woody Itson threw down on the dirt in the final straight at Braddock.The word that I got later on in my freestyle years was that the Vans half was very difficult to ride as it had no flat bottom at all, so no setup time. You’d never tell though the way that newly christened Hutch rider Mike D rode it and Huffy maniac Brian Blyther tore it up. These were the earliest days of freestyle, before videos, and seeing these guys ride in person was a whole nuther thang back then. No wonder freestyle became so huge, the promoting of it was off the hook.