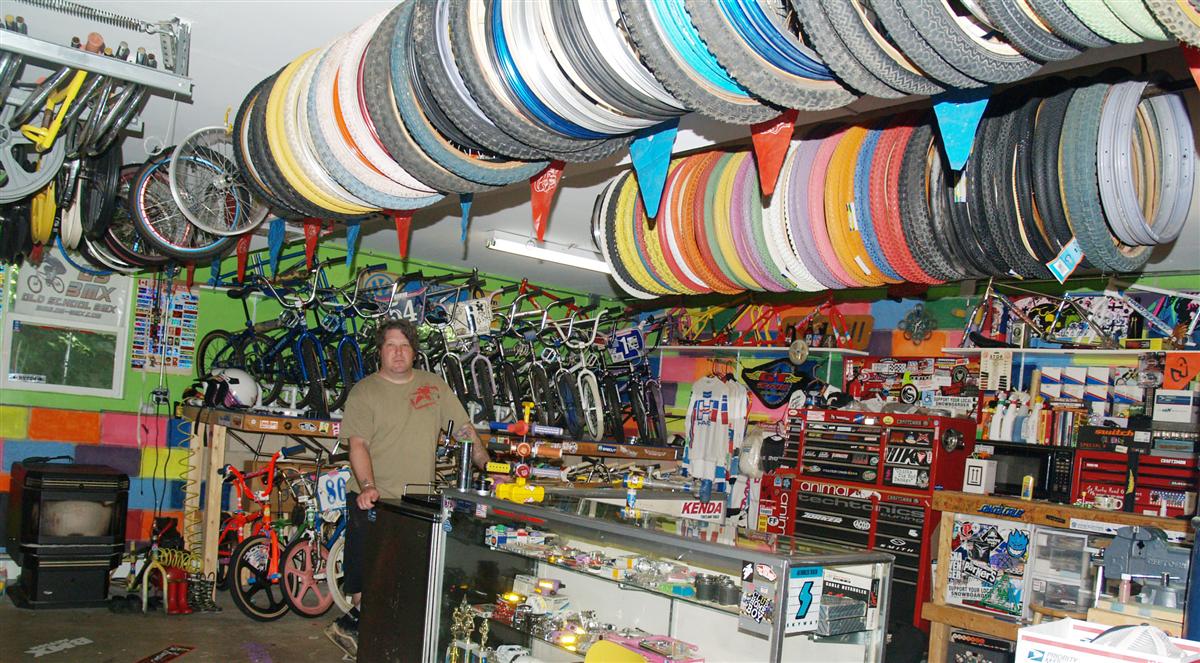 “I always wanted to own a bike shop when I was a kid, having this let’s me realize the dream without all the drama that comes with having a real
shop.” (paraphrased a bit but that is basically Brian explaining why tons of BMX history is set up, BMX Bike Shop style in the garage of his home in Glenwood, NJ.)

I had been wanting to get to Brian’s since he had the very first Fall Brawl all the way back in the halcyon days of 2005 when the idea of getting a bunch of the old guys together to have a good time and reminisce about the early days of BMX was still in it’s infancy and Brian was one of that ideas innovators. Having been a sucker and never making it in 05, 06, 07, AND 08, I decided that it was time to pay one of the guys who keeps NJ repped in a super positive light out there in the old school BMX collector and message board land, some respect. So, this year, besides heading up to the land of OS for the Summerslam, I asked Brian if it would be cool to head up a few weeks early so I could do a little write up on what he has going on in his garage with the old school shop and maybe get some of his thoughts on tape of not only BMX’s past but where it could go in the future. Luckily he agreed and we set up a time for me to wander up get the shots and some words from the main Slammer himself.

I got there a little after noon, once again getting GPS’d to the wrong side of a lake, (man…stay away from Sprint’s navigation system for their phones!) Brian had already been out most of the morning working on a secret project with the kids and his wife Joanne. (the secret project… well it seems that most people that live near him will be
having a good time with what he is doing!) Before I even got a chance to get inside the land of 1,000 old school bikes, he bolted me up the hill near his house and said, “take a look at this!”. Well right next to his property is a small vacant lot with a slight downhill slope which had just enough room for, yep, a small set of trails. Of course nowadays trail riding has evolved to the point where a lot of motorcycle riders would be afraid to jump what the guys on the Dew Tour ride but Brian was going in a different direction. Just a little trail, some small jumps for little kids, himself, his wife to have fun on. Ya know, that old school, let’s just mess around with some tabletops and bumps in the woods feel. Looking around I remembered Dave Dechert’s stories of Windsor Woods and how this would be almost like history repeating itself in a positive way. We all stood there for a good half hour just talking about what this kind of set up meant to us when we were little kids and seeing how it could be a real good thing for the newest generation of BMXers coming up.

Talking about the future of BMX eventually leads us old guys to wanting to talk about the past of BMX, and when you are around someone who  has been on the scene as long as Brian has that’s a lot of talking. So we headed into the shop and started chewing the spokes.

The first thing that hits you when you walk through that door is an overwhelming sense of the history of a sport that our generation brought into being. Classic BMX freestyle and race bikes share rack space with cases of the same in regards to the parts of those bikes. Whether you are 43 or 13, you will get the feeling of what makes BMX so great to begin with. It’s fun. Ya see for Brian, it’s not about cashing in on old school or stressing on whether his kids are winning the races or even if he is still advancing in skills, it’s about what is should be about and what keeps people into it, having a good time.
Surrounded by this much history and a guy who’s been there for much of it leads inevitably to long talks about BMX, from where one has been, to where the
sport is going.

So I pulled up my pair of Vans, and we dished the BMX. Things I learned about the man? Well his wife was a local mountain bike champ, (um, the couple that rides together…etc., etc.), he has a mountain bike or two but chose the BMX because as we all know, well dang it, they’re more fun. What else? Well, Brian is originally a South Jersey local! He’s from the LBI, Manahawkin area and used to hit up George Hoernig’s A.S.S. Skatepark back in the day. His love for VW’s eventuallly led to meeting Ralph Sinisi of Animal Bikes, which THEN led to learning Ralph was a rider as well. (Yea, BMX in NJ is a pretty small tight knit group.) Speaking of VW’s that’s how he makes the cheddar, working on the German machines. Most importantlly though, is his passion for BMX and wanting people to have a good time being around it.

That passion eventually led Brian to the internet and finding other old school BMXers. Which led to talking up the history of BMX, which led to a bunch of guys asking the inevitable question…”what ever happened to…”. That simple question eventually got a lot of the old school pros back around and answering questions. Which led to Joe Kid On A Stingray…Ok, well maybe it wasn’t EXACTLY like that but the enthusiasm that he brings to the scene definitely gets everyone pumped up on BMX.

Where did a lot of his old school collection come from? Bloomfield Bikes, around the time of the changing of the generations, there was a lot of old stuff sitting there, he got to know them and started to buy up the classic BMX products they had in there. From that move, he’s been able to sell and buy different pieces to grow the old school BMX collecting scene by leaps and bounds. His easy going demeanor and honest dealings has brought all the OS guys together.

Which eventually led to…
The Fall Brawl. Brian’s first BBQ up there in Glenwood. A small get together for the guys who really understand the basis of what BMX is all about. Fun, good
times, laughs and friends who share the same interest. Bringing BMXers together, that was the calling. From there, the yearly event would continue, changing seasons to become the Summerslam that he has today. BMX for the BMXer.

While all this was going down, he and his wife had two cool kids, Cooper and Caterina, while in his spare time, “the shop” was put together!

The shop…if you could travel back in time to the mid to late 80’s this would be the place you would want to hang out. Brian must have one of the greatest ladies in the world because his entire garage has been transformed into that dream shop he had in his mind as a youngster. A place where BMX riders can sit down, relax, shoot the b.s. about the sport and feel right at home. As he puts it, we have all the amenities of a real shop but none of the drama. No drama. If there is one thing that eminates off of the main man of Summerslam, it’s a relaxed feeling of not getting stressed over the “drama” that can infect BMX at times, whether it’s racing or collecting, chill is always the word of the day around Brian.

For those of you that have been paying attention to the news in the BMX freestyle world, you may have noticed that Nourie, Blyther and Wilkerson reunited for a show at the worlds this past July. What most of you probably don’t know is that the bikes and some of the uniforms they were riding came from, well they came
from Brian’s shop. Yepper, once again, NJ is the unsung hero in the BMX world. During the time I was hanging there another bud of Brian’s showed up, Jeff. The BMX talk got pretty deep for awhile when I found out that he had interviewed RL Osborn and gone with Brian to that big old school reunion in Cali this past June. Apparently Jeff is not camera shy and is known to interview whoever he can get on tape! Getting the old school on tape for posterity!

We exchanged more stories, laughs and filmed a bit more for the brokenspokes show before realizing that much of the day had flown by! Jeff had to get rolling and since I had a 2 and a half hour ride as well, I decided it was time to roll back to Brick with footage, pics and once again a renewed passion for doing what I can for BMX.

That’s really what being around guys like Brian do for the older generation of BMXers. They keep us stoked on being around something that we have loved since we were kids. Events like Summerslam and the many ideas and plans he has cooking make us all want to do stuff to get people stoked on the sport.

Thanks for inviting me up there and I will see everyone at Summerslam ’09!