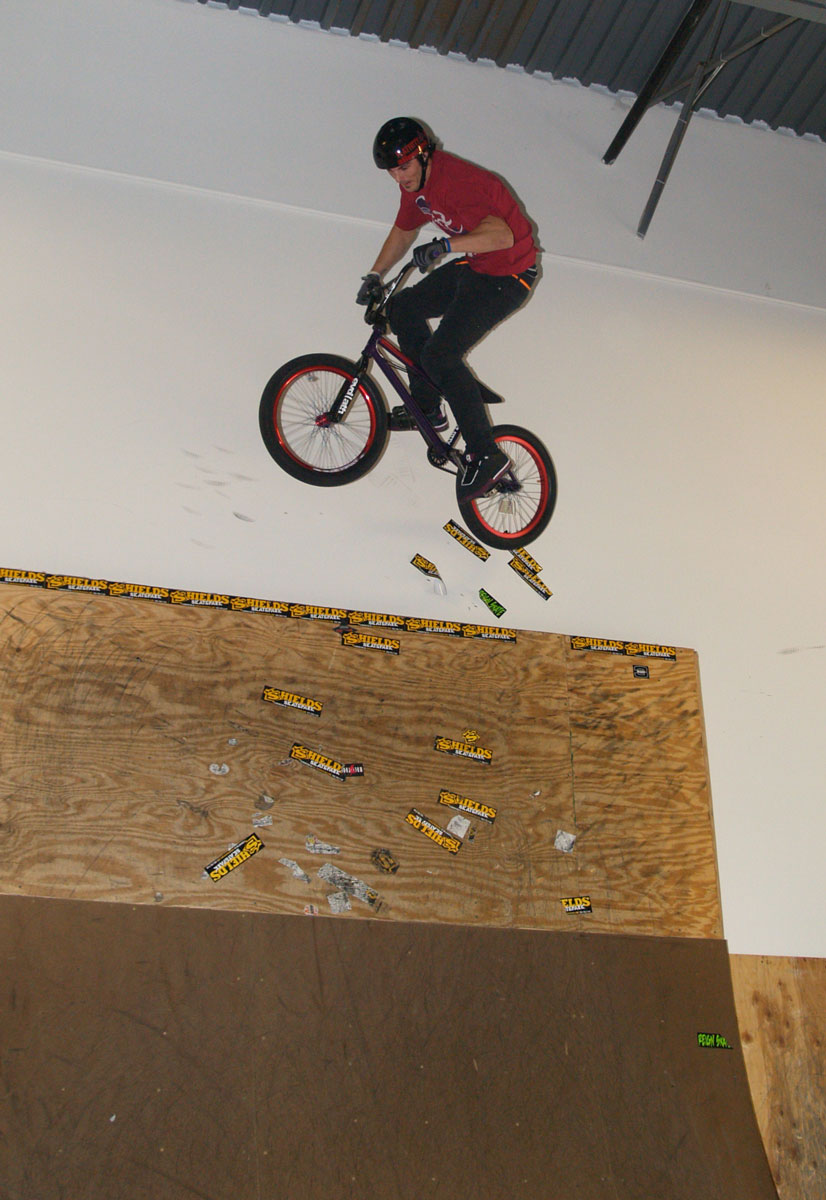 Shield’s comp season ends right around the middle of spring, ’cause they realized a long time ago that people want to ride outdoors when it is warm out. Even though NJ had some great outdoor weather on May 16th, Shields still had a pretty decent turnout for it’s last contest of the season and Aaron had more dazzle and less frazzle this time around as he actually had some helpers at the park getting the whole shindig moving along. Normally, I would go into a long diatribe on what went down at the korntest right here but this time around I’m gonna save the Advanced and Intermediate (that’s what Shield’s calls their upper two classes…sorta funny how every contest organizer has a different name for the classes they have…) lowdown for BMXNJ Mag and the highlights for later when brokenspokes has thier video edit up. For now though we’ll blow through a couple quickies and then let some pictures do the walking and talking. Big props to Hyper Bicycle for coming through with a new MIA Spinner frame for the winner of Advanced that day as well as Animal, Hyper Bike Co., DK Bikes, CJS Bike Shop, Efingers, System Cycles, and EfinWear for the rest of the contest shuwag!

First up, things were a little more relaxed this comp since A-Graf had his helpers out there getting things done this time around. The contest was run way more efficiently and it showed.  Comps in NJ have gotten real tight over the past few years. On the progression front the Beginners are stepping up the game.

James Woodell was lofting large and letting loose with lots of jump box variations. Enoughvariations for 3rd place. Eric Yudin got second with lots of stylecat maneuvers and the youngest Goldsmid, Shane “The Gunslinger” pulled out all the stops to take home the big number oneus. The Goldsmid family is big guns for BMX, with Dad Clay Sr. owning Hyper BMX as well as being a top BMX racing pro at one point till back injuries took him out of the game. Shane was stoked on the win and it looks like he is off to follow in the family legacy. Huzzah!

Intermediate was outrageous and another Goldsmid hit up one of the top tre spots.  Nick Jones busted in for 3rd getting down with whip drop ins and tuck no handers. Clay Goldsmid got the second utilizing lots of style moves and flow with a heavy race influence.Turndowns, flatties and no foot can cans sealed the deal for #2. Steve Quigbey got the big bag of swag this time around. Busting out whips that clear the whole box will get you that kind of prizes at the end of the day.

The PA contingent was in full effect at this comp but we’ll detail that dude in a bit. Dan Mentzer had crazy lines and a mastery of the 6′ quarter that reined in 3rd place goods for him. Justin Ceaner was doing stuff that we just can’t recap here where small children may be able to read it. All I can say is he was going so high and busting so big that the roof almost blew off of the park. Luckily the rood stayed on and Justin was able to wander out with number 2’s prizes. PA’s own Steven Weiler crossed the border to take home the Hyper MIA frame and a bunch of BMX swag.He had the best lines in the park that day and was murdering the line between the quarters and the jump box as well as big transfers by the mini ramp.

We’ll have a more detailed wrap up of the comp in the next issue of BMXNJ Magazine. The day was pretty killer though with tons of good riding and laughs with good peeps once again. The indoor season at Shields may be over but the BMX year is just getting going here in NJ and from the looks of it, things are gonna get pretty mofreaking wild.

For all the pics from the comp click on over here .

See ya at the next one,