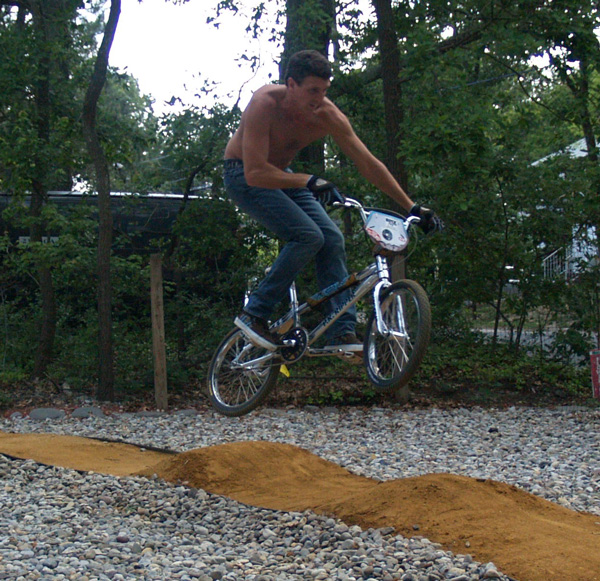 sure as hell doesn’t mean growing up. This is a tale of getting someplace you never expected and being glad you got there.
So I take my enviromental activist, ex-motoxcross riding, animal rights, girlfriend out to the Boom Boom Huck Jam in
2005 ’cause I figure she would be into the freestyle moto-x stuff and I get to see the freestyle BMX maniacs get loose. Well, the show is over and she is going on and on about WE GOTTA BUILD A RAMP, at her house. (um, preface, this is back before we moved in together and built our new place) I was partly amazed and freaking stoked that she was that into BMX that she would be down to put a ramp in her yard. We  talk it over and we figure a half, which would have to be a mini anyhow, was sorta tiring and wouldn’t be much fun for her too. So we decide when we get the new home done, we’re gonna throw a little pump BMX track in to liven the yard up…and get some much cooler exercise.

and…2008 has been the year of finishing up the small pieces which included the “track”.

It’s crazy to think where life takes you and growing up as a “BMX kid”, I never put a lot of thought into where it was all gonna lead, I just wanted to have fun on the journey. Meeting Christine and building the place we call the Woo Woo Inn has been one hell of a ride.

Ok, building a fun little track to get some laughs out of, well the first thing we did was toss a pond out near our front door and build a bridge over it, then the great Carol Gleason, volunteered to make us one of her killer clay sculptures, (which was AWESOME as Carol and her husband Bob were pioneers in the sport of BMX!)so it seemed like we were all set and blessed by the NJ BMX legends to make this thing happen.
I call my excavator friend and get 25 tons of clay loam dumped in the driveway,
it’s the hottest week of the 2008 season and we say.

We started by laying out the clay loam as a path in the area that we moved stone out of and layed 4×4’s down on, which was two nights of pure and insane FUN…..ok, more like hard labor but me and Chrissy got the job done and friday night there was 200′ of clay loam laid out and ready to be rolled into a nice hard pack surface.

We get up that Saturday and if you all remember the heat a few weeks ago, you’ll remember it was quite toasty, so we head out to  home depot and pick up a lawn roller, (I’ve since realized this is something you need for track maintenance and have ordered one from Target.com of all places, $123 greenbacks shipped!) and got busy.
Christine played front end loader (oh man the jokes that can be made there) and I was dumper and shaper. The water and lemonade was flowing like mad and I made what was in retrospect a nice crazy mistake, I put down WAY too many jumps in my zeal to make this “really cool”. I’m figuring pump track, this was more like out of control insanity land. (Those pics aren’t up here, LOL) But anyway we got
cracking and put in a jump about every 8 feet peak to peak and a nice little tabletop, and three berms.

It sounds easier than it is. Moving 25 tons of dirt, one wheelbarrow at a time, is quite a feat I have learned, especially when you are in your 40’s and it is over 100 with crazy fat humidity. But we kept at it and kept sweating and kept wondering, why are we doing this?! LOL. I actuallly reminded Christine that it was her idea more than mine since she was so hyped after the Huck Jam. So 9 PM Saturday we call it quits and pass out. Sunday AM, same thing, I’m back at it and wheelbarrow after wheelbarrow goes across the yard. I could feel it was starting to get to me and I was pushing it as the roller had to be back at the Home Depot by 6 AM Monday morning.

So I shape out all the jumps, pound the berms in and just squeak by getting the whole thing put together at about 9:30 Sunday evening.

Let me tell ya, good clay loam like they use on baseball fields, packs hard and quick, fast. The track was rideable by Tuesday and that’s when the realization that I went “jump nuts” hit me. I should have realized that when Chris looked
at it and said, gee, there is a lot of jumps there, I’m not sure I can get through all them…well, there was like 25 jumps in that 200′ track so she was right! Which was actually the second time she kicked me in the buttocks, the first time being when I was laying out the 3rd turn berm and she kept saying, I think it’s too tight. And sure enough when I got to the point of tossing dirt there, it looked WAY too tight. (You know you made the right choice in ladies when she discusses berm radiuses with you while building a track.)
I had to head out to Saratoga NY for a convention for 3 days so the track had to wait. I came back and then, it was off the another place with me and Chris…so again, wait. Finally, we get back and the next week is all, a couple laps, change this jump, laps, that jump. Till it is just about tweaked to where I like it.

Which brought us to this weekend. We craftily whittled the track down to 3 sets of doubles to jump, 1 nice tabletop, 1 set of roller jumps, and 2 berm bumps with 3 berms. This Sunday was ride and test it day and dang it, all the sweating, craziness, almost passing out, was, of course, worth it.

Just like it was when we were kids and we played “in the dirt” with our bikes. I’ve thrown in a bunch of pics of our little slice of BMX heaven here, the shots of me are by Christine, I’d put up a few of her but she bailed a few times later in the evening while trying the track for the first time and wasn’t all about
being photogenic on the SE Floval Flyer.

So that’s it, that’s what it’s all about. You can grow up, get a mortgage, fall in love, do all the things people do but
BMXers, man, well we don’t really ever stop being BMXers. There is always that little “what if” bug circling our heads and when we get around the right people who have that same attitude, things happen.

Things feel sorta complete now, BMXNJ has a home, there’s a BMX track outside and I am back in touch with my roots, playing with dirt and just laughing and jumping.
The circle is….

It’s only gonna get weirder from here, I think BMXNJ needs an electric car to get to events……
Oh man…he’s going out there again!

It was a good time and I recommend other BMXers who own their own place to do it.