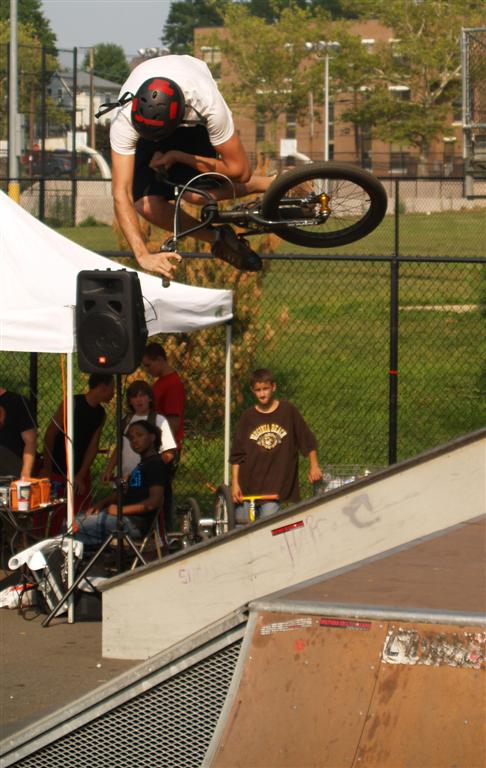 CJS, now synonomous with 2 and 4 wheeled action sports in the Central New Jersey area once again returned to the nearly famous, Perth Amboy Skatepark for this summer’s second round of contest mayhem. I should give you a little insight into what actuallly goes on with these jams as they aren’t your usual contests. First off, Al runs them in conjunction with skateboard contests, skate being the first half of the day and BMX the second, which generates a lot of people coming out and having a good time and experiencing the different aspects of “extreme sports”. Secondly and most amazingly at these particular jam-contests, no entrance fees are charged. That’s right
BMXarinos, you can come out, ride all day, potentially win some cool swag and all for the low low price of $0.00. (strangely enough the same price we charge for this site and szine!, LOL) So the  next time you see the words, CJS and BMX-Skate contest on this site be sure to roll out.

So, back to our fearless BMX comp. This time around I brought an assistant with me, the lovely Deirdre Verdolino. For those of you at the comp, you may remember her as the woman holding a video camera the whole time. Thanks to her, BMXNJ.com will now have a good sized video highlight of this comp, up on youtube in the next week or so. We got there just around 3:00 o’clock thanks to Jersey Shore traffic, so we had just enough time to set up the banners, get the cameras clicking and check the INSANE BMX action. First up was the beginner class. There was a lot of Perth Amboy locals and they were shredding the course even crazier than just last month. 360’s over the spine, barspin flyouts on the mini and hip, these guys were getting pretty loose.  Trevor came out sporting the 80’s metal look and rocked the course with a cool street inspired style, plenty of flow and nice 3 6 0’s were tossed out by the man. Phil, who managed the 5th place was putting down with the flatland freestyle moves on the course which was very inspiring to an old dog like me as flat never gets any props today on the NJ scene! 3rd place ripper George was busting out with some good grinds, and lots of lip tricks including an old school abubaca on the hip. He threw some pretty hefty barspins and 360’s over the spine as well and clinched down his placing with a huge boost over the hip into the mini ramp. Crazzy for the beginner class.

Second place jammer Parth was very smooth on the course and pretty consistant with his flow around the park. Class winner Danny was all over the park going for some pretty big tricks and busting a nice high speed manual up onto the box and off. The final order for these guys was 3rd George, 2nd Parth and the winner….Danny.

Next up was the huge intermediate class and these guys were wanting to take home the top 3 swag big time so they were going for the big stuff. Jason was busting out with some good transfers and was letting loose so hard that his glasses were flying off all while being brakeless. Lots of grinding and spine tricks were there as well. 3rd place went to P.A. local Jay D who popped off a sweet 180 transfer into the spine and HUGE 360 transfer from the spine to the grind rail ramp. Julio, who got the 4th started his run with a shuweet 180 drop in to almost grind on the side of the mini ramp, then proceeded to loft all kinds of 180 and 360 variations on the comp. Class winner Corey who had the mondo cheering section was blowing up with big spine transfers, a clicked turndown over the mini hip, and a crazy big 360 over the spine. Local favorite and big time bundle of BMX energy, Shawn was all over the park with some big can can transfers, 540’s over the spine and a no footer off the grind rail. The way it wound up for the inter’s was 3rd-Jay D, 2nd- Shawn and 1st- Corey.

By the time the expert class rampaged onto the course, the fans were just about set to implode. With NJ BMX heavies in the house like the CJS Crew, Efingers bad boys, even Bulldog bikes sending out their man, Mike Seawright, this finale to the day was set to be off the mofreakin’ hook. The man who this time was at the bottom of the results pile this time but was at the top of the height meter, 1iJoe, was absolutely killing it with the transfers on the mini and hip ramp, long and lofty was the order of the day and just in case anyone thinks the guy can only guy super high on a ramp, I witnessed a 10 liptrick combo run on the mini ramp that would put some pro guys to shame. The guy shreds.

As for the rest of the class, here’s a few highlights before we put up the video highlights later in the week. Since big  respect should be shown for the guys who run in the hardest class, I’ll just put the results first and drop a few wordly highlights on them in no particular order. So…here’s the results: 1iJoe-5th, Jessie- 4th, Mike Seawright- 3rd, Roman- 2nd, Eddy- 1st. Roman busted out with a FAT x-up one footer boost from the mini to the wedge. Mike Seawright, tailwhip air on the mini hip, 360 transfer mini to hip. Eddy with a huge toboggan air transfer from the mini to the Faaaaar wedge, 360 ove the spine to barspin tailtap. Roman had a suuper smooth 360 flyout wheelie to wedge transfer, 180 tailtap to abubaca on the spine, the man can string some tricks together and all without brakes. yo yo, Dario broke his chain in the final run but went out on a borrowed bike to still stomp out some tricks including a nice tailwhip flyout. Jessie started out his run with a tailwhip drop in on the wedge, then got loose with a tailwhip transfer from the mini to the hip. Joe had a crazy stalled out footjam nosepick on the long 1/4 pipe. Seawright came back later on with a tailwhip over the spine to one foot landing and a 540 on the long 1/4. Special props to Rob who moved himself up to the expert class the day of the comp, he went for a fat 180 barspin transfer in the mini ramp. Class winner Eddy boosted a fat 360 transfer from 1/4 to mini as well as having the most varied and smooth runs of the expert class of the day.

After the comp, Al had his usual free product toss, giveaway, have a good time throwdown and the ever appreciative crowd had another good time. BMXNJ says hit up CJS and give the guys who give so much to the sport some needed props. See you all at  the next jam, the BMXNJ crew.

Stay tuned for video highlights later this week. (what we can scrape together here)
Special thank yous to the guys from York, PA who drove all the way up in a bio-diesel pickup truck to ride some flatland at the comp. Andrew and his bud were throwing down the moves in the parking lot and we  have some cool video of the action.

Flatland freestyle returns to NJ in 2009, so says BMXNJ.com.