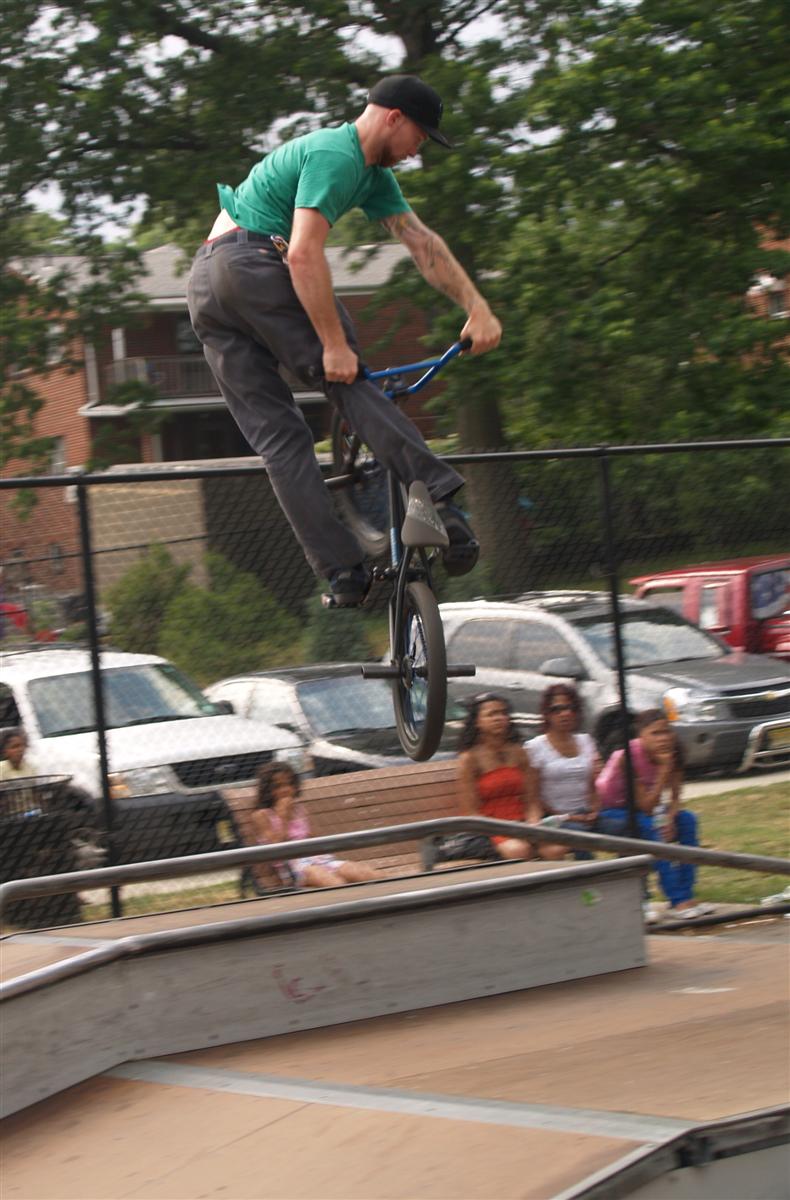 The Alinator (so named now because of the dude’s massive arms!) from CJS put together another little jammy on his birthday at Perth Amboy  skatepark and invited about 100 of his closest BMX buddies to come and ride.

Ok, well maybe it wasn’t intended to be a birthday party but it was Al’s birthday and the comp was a good time so it was pretty darn close. As usual BMXNJ arrived just a wee bit late, Carol Gleason was having a few web situations going on and I had to help her out and as usual shoot the talk with her and get her vibe on the BMX scene, but after that a quick jaunt up the GSP and I arrived in Perth Amboy with my good friends, threatening storm clouds, right behind me.

Al has been putting on these events with quite a bit of frequency these last few years as well as sponsoring a lot of freestyle BMX stuff and his own race team and it really shows. His area has really built up quite a scene and the talent that is coming out of there is pretty intense. Having just moved into a new facility and giving birth to the next generation of Alness he remains low key and intent on helping the local guys bust out. Always a good time at his events and I fully recommend you take the time out of your busy BMX duties
to attend one or several. It was one crazy, hazy hot and humid afternoon so the experts were taking it a little chill this time out but the beginners and intermediates were sweating it out on the course. Since we’re on the subject of the future park shredders let’s discuss what I know of the class…

I arrived just as the beginners were finishing up, which is a bummer as it’s always cool to see the young guns bust out their lofty jive. (um….those are all 80’s terms so bear with me, kazow) Though I wasn’t witness to it, I can confirm with validity from the judges and announcer the ever vocally tantalizing Aaron that the following went down.

Joseph M, “JoJo” got the 3rd with a bunch of transfers, a couple with a 360 thrown in just to be sure it was a dope run.
Carlos S. bumped passed him for 2nd with a 180 transfer over the spine and a hip transfer as well as a rail ride to get the goods. And it was Frank C. who rocked the first place this time around with a 360 over the spine, ice pick grindage and all kinds of manuals. The beginners went all out and I blew it by not getting there in time for their class but I will get up earlier on the 26th of July for these guys!

A quick intermission and practice was underway for the intermediate class. These guys were looking pretty tough in practice with a couple guys busting out over under jumps on the spine, even shredding it with a 360 over the other dude. The shape of things to come in the more advanced classes looked ding dang promising.

Intermediate saw 720’s attempted over the spine ramp by one dude who was shredding the course with all kinds of speed and flow. A 720 was pulled on the deck of the mini ramp by the first place rider and the rest of the class was busting loosed with 540’s, 360’s, 360 transfers, tailwhips and assorted freshness that was street inspired on the rail-grind box. When the masonite settled the class went down like this, 3rd place to Dylan D., second to Cory R. and the winner, house favorite, Dario, who was murdalizing it all day long.

Due to the massive heat, the expert class was pared down this contest to just 4 riders but that did not stop them from stomping it out come contest time, Dan Diehl who picked up the third spot was doing some crazy tailwhips over the spine as well as barspinning variations to pass the time out on the sweltering course. He also had on a classic Zoo York shirt in black, to stay cool on the asphalt. “Snake” John, no relation at all to Snake Plisken was blasting turndown variations all over the place and hitting the course harder than a cobra shedding it’s skin,(for those of you knew to the site, welcome to BMXNJ.com, home of incredibly bad analogies) he picked up second place goodies for his efforts in the muggy land of P.A. Teddy, who was BLASTING the course with air and speed during his run took the win at this comp in the big guys class. His headphone induced mixture of big transfers, spins and lip tricks persuaded the judges to let Al give him the massive swag in the expert class.

Nike Pro Nigel Sylvester was in the house and gave the best trick of the day award to Doroba for a sick grind variation on the box that was more
difficult than this old man can even explain, but none the less way killer was the easiest thing to say about it.

That was it for the contest but since it was Al’s birthday,  he decided to do a reverse present thing and GIVE AWAY a whole bunch of stuff to the rabid mob of BMX fans that had accumulated there that afternoon. Well Al, the Animal Bikes Crew and Nike proceeded to do a massive product-sticker toss from the top of the mini-ramp and it was madness, but a good time for all. I don’t think one kid walked out of there without at least getting a sticker.

That was a rap for another fun freestyle jam from the CJS crew and just in the nick of craziness as the storm gods had
finally said they had enough of this and let loose with a barrage of heavenly spit upon the course in Perth Amboy. By then we were just about packed up and ready to head back to let the day’s events sink in.

Next comp at Perth Amboy is July 26th, it’ll be free once again, so stop on by and have some good times bro, it’s worth the trip.

For even more REALLY good stuff look for Issue 13 of BMXNJ Szine at a local BMX supporter near  you come August!