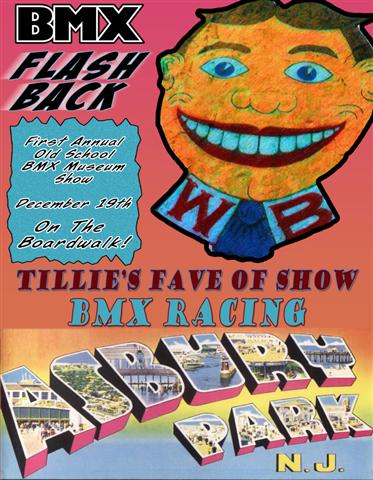 A text to Mookie at Brielle Cyclery Friday afternoon after he hit me up with “Is there anything else you think we need for the jam and show?”. Yea, I replied…snow shovels.

As luck would have it with me (for those of you who remember the “Shore Ride”, it had massive rain the day before and showers the day of.) a UNPRECEDENTED snow storm shot up the east coast on Friday the 18th and proceeded to slam the entire shoreline of NJ almost all day Saturday with the most intense part of it smacking us right when the jam and party were to go down, 2 pm to 1 am. Frantic phone calls were made and even though a few guys had braved the weather to get to Asbury Park, we decided to postpone the whole shebang minus the After Party, till the following day when the weather would be slightly better.

I could go into a lot of things at this point about how bummed I was at how the weather basically kicked us all, OS guys, flatlanders, and BMX partiers alike, in the balls. I’m not gonna though because I’m writing this little blurb on Christmas Eve so this thing is staying upbeat! With that being typed out, I’ll give a real quick rundown, as Louis Orth will be giving us a write up in BMXNJ Magazine issue 1 in late January. (now postponed because we need content so I’m waiting till AFTER Shields first 2010 comp to bring it out.)

OS Show? 1 word. Brian Biel. Brian was good enough to brave the storm with about 9 bikes all lined up there in Brielle Cyclery that wintery day. Since he was that badass, he took home both plaques. Thanks for coming out! (and thanks for the killer Fall Party!)

Flatland Jam? Budz, Keith from TR, Buddha, Don, me, and Louis O braved a bunched of jacked up roads to ride for a few hours in what will go down in history as the place where flatland BMX began to come back to the forefront in New Jersey. Had the weather not been jacked, that place would have been FILLED with flatlanders, instead driveways across the eastern USA where flatlanders lived saw them digging out, LOL!

Snow doesn’t stop progression. After the jam that evening, I went back in and talked to a guy who at some point will go down in the NJ BMX history books as one of it’s great promoters someday in the future. Small flat jams in Asbury Parks Briellle location will be going on this winter (reserve a spot now!), more events will take place in Asbury Park AND in the convention hall. The Flatland Jam that should have been huge this December will take place AGAIN at some point in the future. The After Party has just been postponed till a later date. So all the BMXers in NJ can look forward to a party for BMXers down here over the winter.

Small setbacks don’t stop us, they make us more resolute in our determination to do what we do, move forward.  Keep your eyes on Asbury Park, Mookie and this site, remember, BMX’s 35th anniversary is 2011 in New Jersey, and we are just getting started.

Thanks to everyone who stopped by, rode, watched and the EMT’s who got to hang out with us all day. In the words of the governator…We’ll be back.

Brett, (I ain’t no JSteady, as you can tell by these pics!)