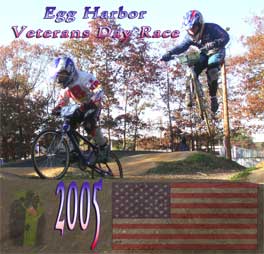 Global warming…fact or fiction…dunno… I can tell you that it was a perfect day down at EHT BMX for the annual Veterans Day Race. With over 65 motos, Atlantic County once again played host to one of the biggest races of the year in NJ. A little complaining was done about the late start of the race, but to give you severly underpaid…non-paid…track operators a break, I will tell you that a record number of reposts due to people re-classing and signing up wrong is what ate up a lot of time.
After motos got underway though, the action heated up pretty quick. 16 Over open was THE class of the day, with over 6 motos of BMX maniacs killing it in there! Everyone from experts to pros, up to some intense superclass riders were going for a chance at the 200% payback purse. Justin Wike came up from Virginia and shredded it for SE but fell short in the main to Lance McGuire AA Pro, who took the main from wire to wire and the major share of the bucks.
30 & Over open, in NJ you’re first thought is Rich Farside, but it was bridesmaid time for the new Hyper ace to Rakin Nasheed coming from Brooklyn to shred the first place win.
The toughest am race of the day 16 Expert was soundly trounced by Matt Kelty.
With Farside out playing in the Open class, Frank Young was left to tear into the 35-39 Cruiser class, Frank is one solid dude and bumping elbows with that guy is like boxing with an iceberg.
The girls classes were lead by Taylor Farside once again dominating 10-11 and Christy Kestler killing it in 16 & Over, special props to Toni Benedetto for a crazy crash in her last moto in 14-15 girls!
Thanks to all the riders and volunteers and see ya in ’06!