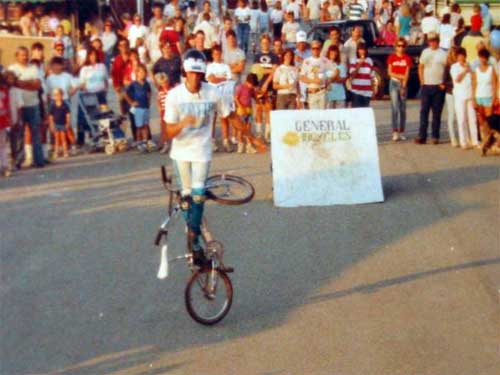 Steve:  Yes, I used to tag along with my local race team & ride flatland on those       slick, smooth floors in the winter.

Steve: Yes, I raced at Oakland and Braddock, but when I switched to coaster brake I couldn’t and didn’t want to either.

Brokenspokes: . How was the NNJ scene BITD. The formative days, who were the big guys up there?

Steve: I had some great riding buddies in North Jersey back in 83 or 84. A guy by the name of Darrel Montgomery from Asbury Park was so awesome, he was just so ahead of his time. As for the scene, you know if you saw a kid on a BMX bike he was really into it.

Steve: I think there were some bike shops having shows and comps by ’85, nothing real organized. We always traveled to PA, NY or Maryland to compete. Back then it was a big thing to find a contest or a show going on. I remember meeting you at a GT/Dyno show in Westwood, N.J. and also at Braddock back around ’84.

Brokenspokes: General Bikes, how did you get involved?

Steve: Steve’s Moped & Bicycle World in Dumont was a customer and recommended me. The first bikes were so bad. I had to ride my HARO with General stickers. But they kept putting money into it. I guess at one point they surpassed everyone in the bike industry with the money put into freestyle BMX.
Brokenspokes: How was Harry to deal with?Steve: He was great. Always positive, exciting to hear from, ‘cause he’d always have some new plan for the team. When Fred & R.L. came on board he made sure the other teammates didn’t feel left out.

Brokenspokes: How did you feel about them bringing on Fred and the other guys.

Steve: I was excited at first. The team was big with a big budget, fresh talent, larger tours, schwag galore. Until after the first tour when Fred went home, the secretaries from General told me that he was trying to get me off the team. Harry shot him down…then well never mind.. (I’d like to add here, that almost the same thing happened to me, where one of the riders tried to get me “dismissed” when I was team manager. It seems Harry knows good guys when he see’s em and summarily kept me on as well. Two cheers for the Myers man)

Brokenspokes: How was the Atlantic City scene?

Steve: Very cool. We’d get together on the boardwalk with Bruce King, Jay Skwarlo, Joe Festa, shred with the boom box till the police chased us out. Usually we’d get enough money to eat at Burger King.

Brokenspokes: Any thoughts on the Lynches and their contests?

Steve: I was glad they had the contests & went to them often. But never had good luck there. I think they were well organized, certainly promoted the sport well.

Brokenspokes: When did you get out of the scene?

Steve:December 1987. Joined the Army. Was real sorry at first, but tried to make the best of it. I ended up seeing Rob Peterson at a demo in Germany. He was cool, he even let me shred on his bike at his demo for Schwinn.

Brokenspokes: What are you up to these days? Do you ever think about getting back into it, even just to have some fun.

Steve: I’ve tried over the years, even got back most of my tricks, but realized I couldn’t put in the hours anymore. I race downhill MTB now, have done 8- 24 hour races. (Holy Sh*t!) I have 5 bikes and will always love anything to do with bikes.

I’d just like to thank Steve for taking the time to jot down this interview and send in the pictures that accompany it. There is no doubt that he was one of the first guys to get stuff going in NJ and without his influence things here would not have been the same.
Keep shredding it man!

“and will always love anything to do with bikes”
I think that quote from Steve pretty much sums up what all us riders are about…
Thanks man!