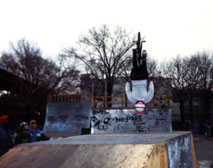 How long have you been riding?

Shit… its been 14 years now

What is your first memory of freestyle?

Drugs and alcohol have all but wiped those out.

Geez… Guys like Adam Guild, Adam Stack, Bob Ryer, Britt Midaugh. Basically anyone that would call me a pussy cause I was scared to try anything. Booze also played a big part of getting up enough nerve to try shit.

What were you under the influence on?

Some of the sickest things you have done street riding?

I tried this retarted 18 stair ledge once at Rutgers, the one on Busch Campus near the Library. All I remember was that I was really pissed about some bitch and wanted to just huck myself at something. Next thing I know im eating shit on the softball sized rocks on the other side of the ledge. I tried it almost 15 more times before I pulled it.

Who are some of your favorite riders and why?

I don’t think I could possibly make a list. There are just too many people that are too good to categorize.

List some of the people who pushed you into injuring yourself?

What do you think of freestyle now?

This sport seems to have far surpassed my abilities. The shit people do now are mind boggling. But as a whole, I don’t think that it has become anything different, people still have fun and some even make a good living off of it.

Any stories you would like to share that may have put one of us in jail from BITD?

Just a few words will suffice for this one. See if you remember this one Adam? Effedrine, Molson Ice, Turnpike, Mullaly, and backflips.

Any final thoughts, views or anyone you would like to thank?

Thoughts are fleeting for me, but ill make an attempt. Bob, Adam S, Adam G, Mike W, Ralph S, Whitey, basically anyone who has helped me see the different aspects of riding. Animal Bikes for always taking care of me when I need something. Ummm…. That’s it for now.