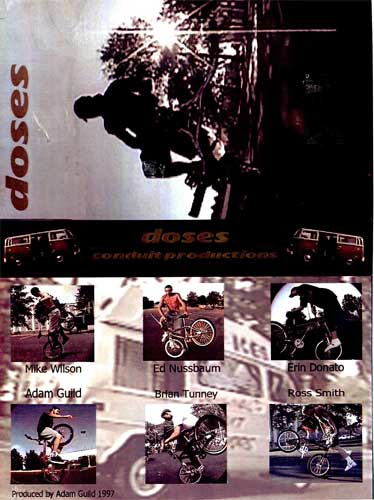 Ed Nussbaum Questions for me.

Who or what got you into riding?

I was sick of team sports and wanted to do something for myself. Local bmxers were doing stuff like riding backwards, 180 bar spin, wheelies, bunny hops, endos and I was into it. I picked up my first Bmx Action in 1983 and had a Predator by 1984.

Who are some of your influences?

Early 80s influences were Brian Applegate (he could ride backwards forever), Erik Gibbons, he was actually the first person I ever saw who had or rode wedge ramp. Dan Menapace and Chris Usher a couple years later.

What was it about flatland that made you focus on it?

I honestly didn’t focus on it until 93. The early years was about being well rounded I rode flat,vert,wedge ,street,I freestyle skated and skated halfpipe and a fullpipe that was in Piscataway. In 1993 a bunch of us went to S.C.R.A.P. for the B.S. COMP I entered stuntboy and got like 26 th or some shit. From that point on I had something to prove to myself.

What made you want to produce videos?

I really wanted to produce videos because I lived near some badass flatlanders that weren’t getting any coverage at all. I had just moved back from Cali and had no money, but I did have a room full of bike parts and an extra Big Daddy. I sold the Big Daddy to Bob Ryer for like $500 and bought a video camera.

What do you feel was your biggest accomplishment in flatland?

I placed in some contests,was in an ad for Primo in Bmx Plus, name in magazines couple times ,in a couple videos,small picture in Tread. I think my biggest accomplishment of all was riding in some empty parking lot with noone else around and just being at one with my bike.

What was the craziest thing you ever saw Ross Smith do on a bike?

Double rolaid while smoking a Marlboro Lite, Rollaid to timemachine, blender to circle k spin. Note the true Blender is a front wheel , switch handed steamroller spin by Ross Smith probably the first spinning trick, one footed whiplash links, no footed whiplash to double decade,whiplash to forward side glide to whiplash links .Also this one long link where he ended in locomotive then somehow into a backwards death truck but never saw him pull it. And finally a double backward decade which Trey Lepper should still have on video . It could be any number of links that most of the flatlanders today still couldn’t do if they tried. Ross Smith rocked in the AFA days and still rocks now.

Brakes or no brakes?

I would actually like to see no pegs. Lets bring it back the old days. If brakes are a crutch then so are pegs. At the moment I ride no brakes only because I refuse to put 990s on the front of my bike.

To each his own. I have not entered a comp since 1998. I do however plan on entering at Hackettstown comp in March just for the hell of it.

I would like to thank so many people who helped me out . Shawn White, Sean McKinney, Jim Dellavalle, Doses Crew, Dave and Greg from TC Cycles. And finally I would like to thank my Grandfather who passed away a few years ago, he always supported my riding in one way or another and inspired me with the phrase “Enjoy life while your young and healthy ”….