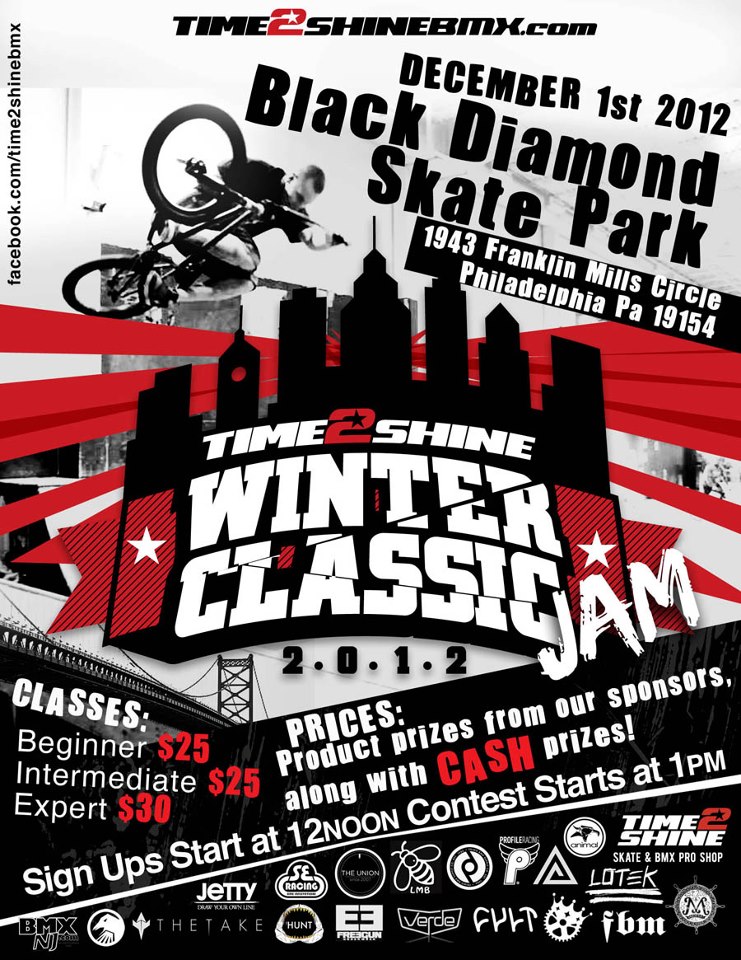 Where did BMX freestyle contests begin in this area? Bucks County PA. From 1986 till 1990 Bucks County was the home to the PA AFA and held regular contests all year long. Now of course that was 5 billion years ago and the days of the AFA and quarter pipes with wedge ramps, as contest arenas are long gone. Fortunately school parking lots as contest areas have been replaced by heated and air conditioned indoor skate parks inside huge malls like the one at Franklin Mills in PA right outside Philly. (I…don’t fully miss the old days, LOL)

History lessons aside, Michael Duda contacted me in the fall with news that they were going back to the scene of this summers Hybrid Festival, Black Diamond Skatepark in Franklin Mills Mall and were going to throw down a “Winter Classic Comp” for the starved BMX masses to shred upon. I hadn’t been to a indoor park contest in awhile and have never been to Black Diamond Philly so I loaded up the BMXNJ mobile and headed out to the Keystone State.

Black Diamond in Philly is pretty intense. The indoor course lends itself heavily to the street influenced rider with lots of wedges, grind rails, ledges, banks and just a couple quarters to nail airs on. (There’s also a GIANT half pipe that actually looks sorta dated at this point. Looking at that mug reminded me why vert is sort of on the wane. 12′ ramps with 2′ of vert aren’t particularly welcoming to the average BMXer)

Registration was scheduled in for a noon start with the comp to start at about 1pm. While the hectic preparation of the contest was going on we were able to scope the crazy amount of swag that sponsors Time2shine BMX Mail Order, KingCity Bike Co., Animal Bikes, Cult, The Hunt, SE Bikes, Jetty Apparel, The Shadow Conspiracy, BMX NJ Magazine, Verde Bikes, FBM Bike Co., The Take, Lotek Footwear, Profile, Madera put up for the winners in all the classes. These companies went out of their way to show some love for the assembled crew of BMX crazies about to risk it on the concrete arena of chaos. (Man that almost sounds like MMA, LOL)

The organizers were able to get the jams rolling on time and things started getting crazy in there with the beginners taking the ramps first. About 30 dudes were vying for the top spots in the final showdown. Lots of great stuff going on in the beginner class like whips, barspins, crazy transfers by the time it got all done though, the top 3 went down like this, tre to Jake Filderman, doses to Evan Brancato and numero uno to Jared Heitzman. These lads will be stepping up to inter in no time.

Since we are on the subject of intermediary classes and stepping…

Intermediate really stepped up the game from the beginner guys and the guys put down some good stuff. 3rd place bomber from Efingers Nick Polnasek upped the ledge straight to a turndown, threw a big 3 across the box and a t-bog on the back quarter then went for a pretty crazy flair flyout that he almost pulled. The crowd was going nuts as these guys started on the floor. Eddie McGhee Mapleshade local locked down second in the finals. Big 360’s, downside whips, huge tailwhips on the ¼ and a 360 across the hip were a few of the mah new vers he used to score the swag. Jake Garelli grabbed the ace with stuff like icing down the rail, toothing the rail on the big wedge box, feeble to 180 on the ledge and 3ing the small bank to bank. Inter set the pace for the highlight of the comp, the lunacy of the expert class. Almost 20 guys were out there putting on more of a show for the crowd then a contest which drove the judges nuts trying to name a top 3 in the class.

Even tougher to judge than inter is the lunacy of the expert class. At local comps these are normally guys who are almost on the verge of being pro’s and can blaze around a park or course like they were born on it. Jim Borio was all over the park and hitting whips on everything available. Toothpicks on the rails, decade airs, a lookback and big whip transfer were his during the finals. Chris Aceto started out stomping stomping a nose wheelie down the ledge straight to whip to flair to bar to an almost 540 off the ledge and tossed out ANOTHER flair on the back ¼. The crowd was losing it. But the best was yet to come Paul Jasluski brought it home barring up the ledge, turning around and whipping down the step up, knocking off a turndown on the hip, and icing the big rail. After some mathematical calculations that would drive Einstein mad, the assembled judges put the order as 3rd Chris, 2nd Jim and first Paul. Realistically it was pretty tight; Paul did take home a few greenbacks as well so I’m sure he hooked his homies up with some grub after the jam I mean why not, LOL. It was pretty chill to see the expert class have a big crowd of people still in the park to watch them get nuts for finals.

Not too long after expert finals, Jimmy Mac cooled the crowd down enough to keep them from blowing the roof off the place, Mike and Chris announced the product toss would be going down to finish up the comp. So with the assembled masses going nuts on the park floor mass amounts of goodies were thrown into the air to land in luck people’s hands. After snatching some vid and photos of the give away, Chrissy and I said our laters to the comp organizers and headed back to the gardenus state of NJ to process the day’s craziness.

We both were in total agreement that these guys really had thrown a great contest that went by at a good place to keep people stoked on being there and stoked to be at the next one. We’ll definitely be back at any Duda, Aceto, J-Mac productions in the future.

Assuming of course there is a future after December 21st. LOL!