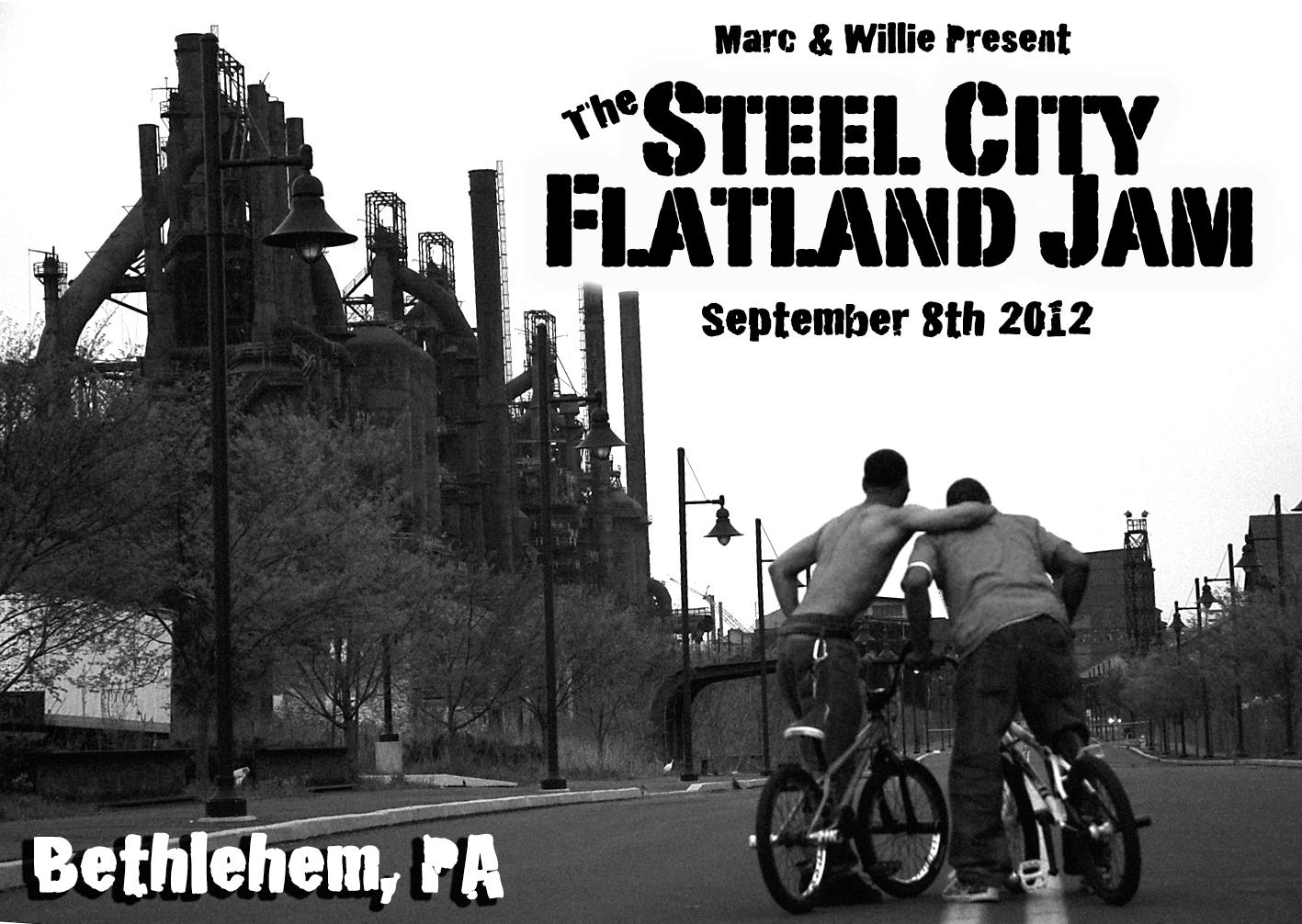 Bethlehem PA. Steel City USA. The dirt and street scene in North East PA is and has been off the hook since forever. Over the past few years though, flatland BMX has seen a big resurgence around here and the riders have been pushing the scene pretty hard. Bethlehem locals, Willie and Marc along with over the border NJ resident JSteady threw out a date for this past weekend to get everyone together for some flat ripping. The weather forecast right up to the day before the jam looked awesome but as sometimes happens, shite got crazy the day of the event. Last minute plans were made to change things up and the jam was expanded to two days, Saturday and Sunday. BMXNJ could only make day 1, but we were looking forward to seeing what was the lastest with the NE flatland scene.

Saturday’s forecast was looking good till the late afternoon so we headed out to the jam spot to be there by 1:00ish. Unfortunately the law had other plans and park employees shut the jam down before it even began. Marc and Willie had backup plans though and everyone motored over to 1200 Spring St in Bethlehem. The location was pretty ripping and perfect for riding flatland. A super level tennis court, divided in two sections, very grippy, SHADED from the late summer heat and ample parking. By the time I arrived everyone was well ito sweating it out on the surface and making it happen.

There were a lot of guys from the entire NE flat scene there tearing up the courts. The Mass. crew with Shane Reed, Marc McGrade, Freddy Brown, Steve Jordan, Sean Maher and a few others were showing why the Mass. scene was always a insane place for flatland. These guys were mixing up new school and old school along with crazy spinning and pumping tricks that were making the local park goers lose their minds. NYC brought it out with their guys braving tornado laden highways just to get a chance to shred the PA flat. Will Wolfe, Fernando, and a host of NY flat dudes were there. Connecticut was also repped with Andrew Parrish putting down the tricks. Even the OG’s were in the house from PA with Ivan Adamiec and PA all around legend Mel Cody making the attendence for the day.

The jam was pretty intense while I was there with only a few stops by these guys for breathers and water as well as bites of Willie’s Mom’s Spanish Rice she cooked up for the guys. Unfortunately the rain did catch up with the outside location and 1200 Spring St had to be shut down due to rain. The guys continued the session though at a nearby parking garage. (There’s a lot of those in Bethlehem, in fact, I gotta say there’s a lot of flatland riders there for a town that has tons of hills!) After that the crew went out to the Sands for a night of good times, got up the next day and had another great time.

It’s really great to see flatland BMX start to make such a resurgence in the area. At one point you couldn’t go down the road without seeing some dude rolling around on his whip throwing down the moves. I’m gonna say with guys like Marc, Willie and Jon out there pushing stuff, it won’t be long before there’s flatland freestylers clogging the parking lots, garages and tennis courts of the north east again.