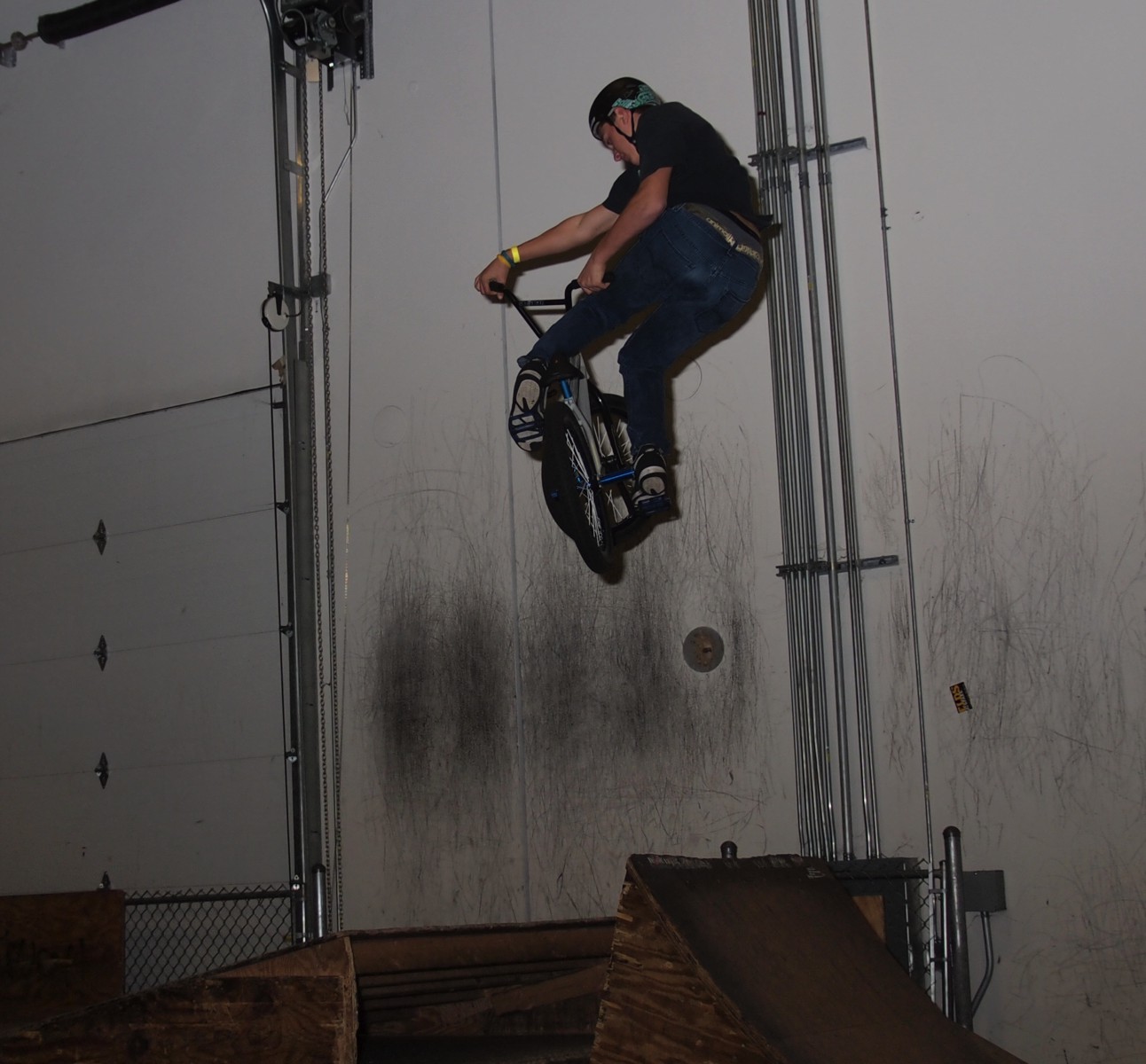 t was the best of BMX times; it was the worst of BMX times. Jump For Joy 18 invaded Shields Skatepark on December 9th and the east coast contingent came out in force. Hell even the machine, Dean Watson flew in to imbibe in JFJ’ness. A JFJ, of course being the best of times.

Word that Paul was going to shutter the skatepark part of Shields brought a heavy heart to all of us. Indoor parks are getting harder and harder to find in NJ over the past few years, especially ones that allow bikes. A.S.S. closed a few years back, Hackettstown last year and now Shields will be tearing down the ramps. The run was extraordinary though and both Paul and Steve should be given much props for sending Shields off into ramp park heaven in style.

Before we throw the verbs and adjectives on the jam, BMXNJ has to send a holla to Clay Goldsmid who take some nasty head banging during a MASSIVE front flip attempt onto the 8′ quarter. He just barely under rotated and whiplashed the back of his head to the deck, causing us all to hold our breath for a few minutes. Clay got up and walked away but was taken for observation just to make sure he was alright. Barring that crash, he was easily on his way to top 4 in the expert class. Get well soon brotha.

Stevearino broke up the riders into 4 classes this time around and added something not seen before at a BMX freestyle comp, a “Groms With Hot Moms” class. Yes, the master of romance had finally given props to all the wonderful Moms out there birthing these crazy BMXers that are coming up. The Groms class (also known as little duders beginner class)

was actually made up of some real little rippers. There were plenty of limbless jump variations and grinds going down all over the park as well as some heavy bomb drops off the back wall ride area. The top 3 dudicles in the class though were Patrick Delabar, Brady Baker and the Grom of the day, Hyper hitter, Jake Filderman who took down the first. Jake was shredding the jump box the whole day and looked pretty stoked on another great placing after shredding up Black Diamond theweek before.

The other classes, which had much less interesting names but were intense nonetheless went down like this.

Intermediate saw BMXNJ Maga cover kid Eddie Ravi rip up the course under the guise of Kid Dynamite and proceeded to throw down his no foot and no foot can cans all over thepark. Eddie rolled out with the 3rd for the day. Rick Loyek got loose out there and pulled down 2nd with Perth Amboy local Kevin Santana taking home the ace for the hard hit Jersey Shore.

By late afternoon the Experts were warming up on the ramps and shite was getting a little out of the sane area and into Arkham Asylum territory, also known as insane. There was a great mix of styles in the class ranging from street style and lots of grinds right up to guys who were just insane on the vert ramps. Scotty Cranmer’s younger bro, Matty was there and shredding. Busting 3’s, flips and bars over everything. He had the Cranmer style, which is go big and technical. The Goldsmids were there, Clay and Shane. Both had plenty of great box jump tricks but only Clay made the finals. Brandon Perez also had the box on lockdown. One of the guys who was cutting loose big time with a street inspired run on the course was Josh Serafin, he was making big use of all the grind rails at Shields and the judges definitely appreciated that. The stand out rider in Expert this day though was another guy who was romping at Black Diamond the weekend before, Nick Potasnek. Team Manager Rich Danielson was pretty stoked this time around as Nick put down the win for local shop Efingers. Nick has a pretty unique style that combines flairs on banks with whipped out seat grabs and orange Efinger cut off shirts which this time earned him number one swag. Second went to Josh and 3rd to Dominick Simoncini from Forked River.

Everyone hung out for the final class of the day, Pro’s. It’s pretty crazy to think that in 2012, Jump For Joy has enough local guys who go big enough to put themselves in a money class. There were well over 20 guys in the class and any one of them could have brought home the bacon. Not that factory farm bacon shite either the good organic stuff. Names like Geoff Meade, Kuhn, Frankie Day, Dean Watson, Nick Seabasty, Mike Almodovar, Anthony Villani, Jordan Prince, Jaskulski, Kaminski, Herbison, Paul Barrum were all out there shredding it in the final jams. These guys made use of the course in ways that no one else could. Frankie day was flipping the spine, flairing the quarters. Kaminski was a ninja on the jump box and was going HUGE on the ¼’s. Dean Watson flew in from the warmth of Arizona to let loose some insane grind action and tucks so deep it was insane. Nick Seabasty brought the street inside and was3’ing off everything including up and over the back handrail. Geoff Meade let loose the now not often seen nothing air was well as his decade jump. These gents were all making the crowd go loony but a couple guys were going above and beyond, their names were Fede and Prince. Mike Fede comes from that long tradition of dudes who are pretty mellow and quiet off their bike but when they get on that thing, game over. The flow, speed and trick difficulty he throws down is stratospheric. Tailtaps on the super huge bank to pole, monster airs on the ¼, and a transfer so big it was almost surreal. Mike took the line from the rear wall ride all the way across over the transition to wall AND the small ¼ next to it into the hip ramp located next to the 8′. The video is located below this inane diatribe I have been on. It has to be seen to be believed. Jordan Prince is another guy…who also happens to ride for Hyper like Fede, that just decimates a park course. Jordan’s airs out of the 1/4 where several feet higher than everyone else and he practiced by airing OVER one of this buddies sitting on the jump box. The Fresh Prince of Hyper finished his run by busting a 360 higher than the banners from the 6′ ¼ to the mini-half on the other side. It was completely out of freakin’ control. I wouldn’t want to judge these contests to begin with and with stuff like that being thrown down, if I were a judge, I would have just skipped town. Be that as it was…and it was, the judges put it together like this, 4th to Geoff Meade, 3rd to Rad Brad Kaminski, 2nd to Jordan Prince, and 1st to the guy the ladies love, Mike Fede. I personally thought that any one of those guys could have taken it but just watching them was a good enough prize for moi.

After Pro finals and the prize handouts, everyone was feeling pretty spent after a full day of Jump For Joy, fun, love and BMXness. The old school heads who had showed up like Adam Stack, Mike Wilson, Rodney Morweiser, and Erin Donato had left the building and I spent a few minutes talking about the next issue of BMXNJ magazine with the Rip It Sic guys out of TR. As Steve and his sister Stephani rapped up the rest of the prizes and got me copies of the results, we said our goodbyes, related stories of the storm and parted ways once again.

Much like the end of the Avengers though…when good times in BMX are needed once again…Jump For Joy will assemble. (and of course there will be A LOT of coverage in issue 10 of BMXNJ Magazine. Who loves ya baby? LOL!)

Fede and “The Line”