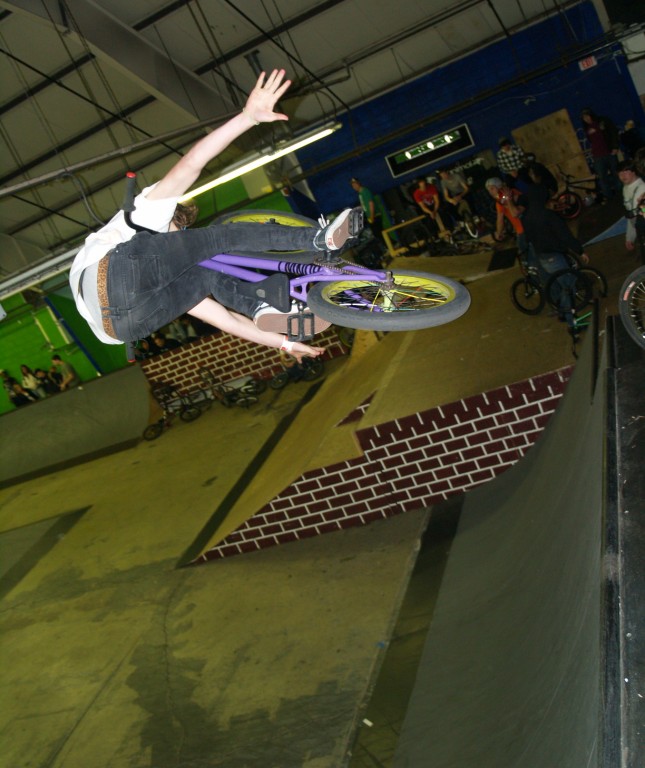 Hippie Steve and all of NJ BMX Freestyle come together to celebrate.

Wow. Where do you start after going to a contest like Jump For Joy. Almost 70 riders. Split up evenly between 3, no actually, 4 classes. Steve had so many beginners this time around that he made up a new class just for the young dudes who have never been to a competition. He called it Super Beginner and it was cool that he gave kids who never did the contest thing before, a chance to ride against other absolute beginners. BMXNJ got there a little after 11am and Hackettstown was PACKED full of people. At least 200 riders, parents, relatives and BMX luminaries were jammed into the small spectating space of the park. For some reason Steve’s comps bring out all the big names in BMX from NJ, whether they race or freestyle.  Here’s a rundown on the who’s who of peeps that were checking the riding. Bill Hayden –njbmxracing.com, Rodney Morweiser- Grove Street Bikes, Ralph Sinisi- Animal Bikes, Al Dimino- BMX Invasion, Jimmy Mac- Bulldog Bikes, Garret Byrnes- T1, Crazy Bill- Somerville Skatepark, Aaron Graf- CJS, George Hoernig- BMX Demos, Inopia, Jay Rodriguez- FreeCycle,  Danny Parks- King Of New York promoter, Dave Dechert- star of The East Coast Is The Right Coast and too many of the old and mid school killers, like Frank Lam, Bob Ryer, and Scott Demarco. Even the guru of all things old school in NJ, Brian Pleva came out to see the jam.  It was truly the first time in the past 5 years that I have seen this big of a mix of the O.G’s and new school shredders in one place in NJ. The Hippie Steve vibe was obviously in full effect.

Steve got the jam rocking in record time with no small thanks to his crop of volunteers who were getting registration done. After a quick pep talk to the newest of the new beginners, the comp got underway.

The actual beginner class was a cool warm up to the rest of the day’s action with some good airs by 3rd place Corey Tomei who was lofting some nice flatties out there as well. 2nd was stomped on by Anthony Mainmone who was transferring all over the park and Tom Spooner kicked out the jams for 1st place in beginner. It’s crazy to think that just a few years ago some of the guys who are now smoking it in pro were right here were these guys are now. BMXNJ looks forward to seeing these new guns advance up through the ranks.

Intermediate class. Freestyle BMX is an interesting thing. We sorta rank people not on age but by skills and ability. You’ll see where I’m going with this in a few paragraphs. Anyway, intermediate really stepped it up with more than a few guys busting out flips, flairs and some of the highest airs up to that point in the comp. Jeremy Lux got the third with a good mix of tech and airs that was locked in tight impressing the judges with his style. The second biggest hippie there Ed Herbison smoothly rolled in for second with his flowy style of can cans, tuck no handers, bar endo airs and great transfers. Ed always has a cool run that exemplifies his peace signs plastered all over his helmet. Who got first? Today it was the oldest competitor at the jam. CJS freestyle team front man, Aaron Graf (finally got his name right in print) took home the inter first. Aaron does tons to push the BMX freestyle scene in the North NJ area and is a shredder himself. A-ron had some great lines, BIG 360’s and is the winner of the “best pic” of the day award for his and his compadres’ set up shot before the comp.  It was great to see the guys who are so used to hearing Aaron on the mic and running around doing the comps to get to actually see him rip it up on the ramps.

Intermission was rocked out by the group Chainsaw Trio. These guys came out and tore up the jams for about 45 minutes in the early afternoon while the riders took some time for some final practice before all the finals. Steveo always comes up with some good stuff for the riders and parental units to kick with at the events, and of course this time was not exception.

The comp was winding down after the band and ¾ of the finals but the airs and action were just beginning to get to the boiling point. The Pro and Am combined class was coming up.

It’s amazing to see in NJ today that we have a class of riders that tear it up at a Pro level that is TWENTY FOUR riders strong. If you name a move being done today in freestyle you probably saw it pulled in this class at J For J. Andre Postell was out there killing, Clipper from Bulldog had the gold machine kicking it with BIG…HUGE…FUREAKING MONSTROUS airs over the jump box and lookback 360’s that were so tweaked he almost started rotating the opposite direction. Rob “Big-Bad-Air” Deveaux  had some crazy big stuff going down while rocking the full face. Vinnie Mannino, one of NJ’s top am racers,  came out again and busted some big airs and double whips on the crowd.  3rd place in Pro-Am was tied up between “The Hitman” Ben Hittle and Hambone. Ben had tons of great moves but the judges said that Hambones, massive flip, flairs in both directions and BARRELL ROLL AIR were good enough to keep them tied together. Second was scarfed
on by Gary Nilson who kept it together through qualifying and the finals with a mix of tech, airs and original lines. Who was the hero of the day?  Well if 37 year old Aaron Graf  was gonna rock the intermediate class it was only fair that 12 year old Sean Ricaney smoked the Pro-Am class. Sean was busy answering the age old question all day, “how can such a little dude, live so large”. Sean had some of the biggest airs of the comp and was stringing together air variations like it was nothing, all on his 18” BMX machine.  It was amazing to see the smallest dude in the class shred the course as hard as he did. The crowd was definitely behind him and was stoked to see him take home the win for the day.

BMXNJ got on the road that evening with more respect than ever for all the people who are making New Jersey THE state for BMX. Everyone in NJ already knows what we have going on. We’re about to take it to the mainstream and show them dogs what’s up.

Thanks to Steve Wisbeski for a great time and congratulations on Jump For Joy 14.

See you all out… there, and we hope everyone enjoyed the “official” Jump For Joy stickers and BMXNJ Szine issue numero 14.

Brett and the BMXNJ crew.