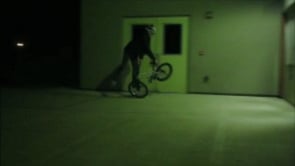 Ever since I started riding, my bike was trash. I did whatever I could to keep it the way I wanted it to be. Unfortunately, I had so many problems with my bike, I just said, F-It and rode with whatever I was riding at the time. If you want, ask Rodney how many times I’ve walked into one of the bike shops he has worked at and he’ll tell you that my bike was always broken or something was wrong with it.

My first real BMX bike was a Dyno Air complete with MAGS!!!! Haha. I rode that for four long years. But I got serious for a year and a half on that bike, thats when I started getting into flatland. I cracked it where the top tube meets the headtube. I rode it like that for four months. Not caring. I remember Rodney constantly saying to me, “You know that is dangerous right?” What the hell did I care, I was 13 years old and could care less about a crack. Now I look back on it and say, damn I was stupid. I had to get that frame welded back together. Three months later I cracked it again, this time it was really bad. The top tube was pretty much sticking up. I had no frame, no money, and parents who cared more about my ability to play hockey than my broken bike. What I’m trying to get at, is that kids now a day bitch and moan about how their bikes don’t work and they need the best parts on their bike to be the best rider. F that mentality. I rode a bike for 6 months without cranks. I somehow still progressed, yeah it sucked not being able to pedal, but I had my fun. Right now, my bars are crooked and I could care less. All I’m doing is riding my bike. When I get around to fixing them, I will. But for now, I just want to land a steam boat to steam roller. So stop bitching about your bike not being completely dialed. Ride it, throw it, paint it, take a hammer to it, I don’t care, just have fun with it. Main reason why I ride my bike.

Oh, here is another version of my new video trailer: