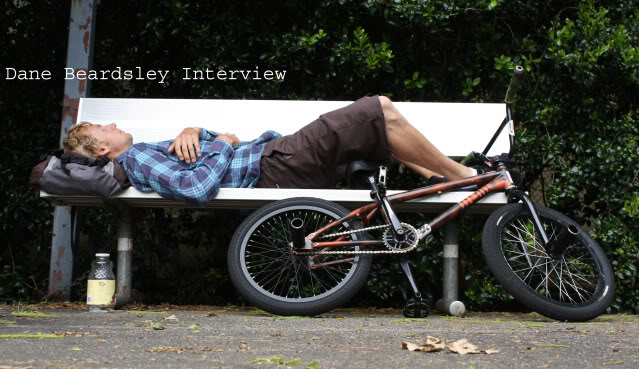 Dane Beardsley is a one of a kind person. I don’t know him personally, but from his videos that he has made, (Same Thing Daily, Video Name, and FlatCrap), his riding, and his little tidbits on his blog, www.samethingdaily.blogspot.com, I know he is a real down to earth person and knows how to keep it real in the world of BMX. Dane isn’t your regular flatland rider, he is also into street, trails, and other forms of BMX. His riding is incredible, it just speaks for itself. He has the best control on a bike that I have ever seen. I actually went out on a limb to ask him for an interview, since I am nobody in the world of BMX. To my surprise he responded with a yes. This interview took a long time, because, one, I am really busy and so is Dane, two, Dane’s computer crashed and lost the whole entire interview, so he had to do it over, and three, I was trying to finish up my semester. So without further ado, here is the long-awaited Dane Beardsley Interview. Don’t forget to leave him some comments.

How are you feeling today?
Just fine thank you.

How long have you been riding for?
I’m not really too sure. I started riding flatland when I was 16 or something. Been riding BMX bikes since I was 14 or something. I don’t really know. Over 10 years.

How did you get started?
My friend Justin and I found a magazine the last day of school. We built some jumps and went mud bogging all summer long on our bikes. It was the best summer ever.

Who were some of your influences?
Friends and my Dad.

Who are some of your influences now?
Still my number one influence is my Dad. He drives a truck for a living and has always worked hard. I remember when I was young my dad would just work, work, and work.  He would never sit around doing nothing, unless it was at the end of a 15 hour day. My dads a bad ass and I don’t think he has ever used the Internet.

I don’t know if many people know this, but you were in the very first Diversion Video Magazine video, what was that like for you? How old were you at the time?
I was a freshmen in college when that was filmed. So I was 20 or something. I filmed that with Bobby (Carter) during my Christmas break from school. It was a lot of fun cause I had never filmed anything before that.
What inspired you to start making DVD’s?
I’m not real sure. I have always liked BMX videos. So I guess I just thought it would be cool to put something together.

You use to live in Michigan, was it tough trying to ride in the winter? I have a tough time riding in New Jersey so I bet it was ten times worse up there.
Winter sucked. Michigan gets lake effect snow, so if the wind was at the right direction over one of the great lakes it would just snow and snow. That’s why I moved to the south. I will take the roasting summers any day over all that damn snow.

Did/Do you go to school, what was that like for you?
Went to Western Michigan University and graduated in 2005. It was awesome. Had a lot of good friends and had the best times ever.

Your latest video, Same Thing Daily, was awesome. Was there any kind of message you were trying to out to the riders?
Thanks! There really is no message behind my videos. It’s just dudes riding bikes. I just pick some people I’m into watching ride and put some stuff together.

Which do you enjoy riding more? With which one do you feel your progress faster with?
I can have fun riding anything really. Flat is by far my favorite thing though. I put way more time into it than everything else. I don’t know about progression, it just comes with being on your bike and trying new things.

What is your outlook on brakes VS no brakes?
Whatever your into. I have seen people kill it with and without.

You have a very controlled riding style, how much time and patience do you have to make it so damn controlled?
Stay lose and keep it chill.

You ride a pretty traditional frame, what are your thoughts on these super light bikes with the crazy bends and other designs?
It’s cool or whatever. I see where it makes sense for some people. But my bike first off is a bike. I need to be able to ride down the sidewalk and ****.

You ride a little bit of everything, do you think each aspect of BMX helps with the other?
I don’t know, it might.

What do you think of kids bringing flatland to street riding (Hang 5’s, Hang 10, etc.)?
Sure, why the hell not.

Scuffing or rolling?
Anything and everything.

Who do you think is one of the most underrated riders?
I would have to say Leif Valin. Maybe it’s because he rides op o and people can’t understand what side is his regular and which is op o.  He can do everything on both sides. Leif can learn any trick in an hour.

What is it like hanging out with Catfish? Watching the bonus material in Video Name of him pulling a decade was awesome!
Catfish has the mentality of 5 year old kid. My parents always tell me it’s time to grow up, but when I hang out with him I see that I don’t need to do that. We have done shows, partied, driven across the United States, ridden a ton, and have had a million laughs. Catfish has done so much for me and I would consider him one of my best friends.

You just recently came in 3rd place at the Indy contest, how you feel about that? Also, congrats!
Thanks! It was a good time. Indy was a cool city that I had never really spent any time except driving trough.

Do you enjoy contests or are you more into just riding with your friends?
Contests are cool and fun to see people at, but they are not my primary focus when it comes to riding. I don’t really like getting routines together and all that. I don’t like going to ride and practicing the same tricks. That sucks. I could be learning something new with that time. I try to learn new things do them for a month or so and then stop doing them.  This helps me move on to other tricks and always keeps me motivated. If I was doing all the same tricks today as I was doing a year ago I would not be happy with my riding.

What exactly does flatland/BMX mean to you? Do you consider it more of a sport or something along the lines of an art form?
It gives me something to look forward to everyday. BMX is not a spot or an art form. I don’t know what the hell it is. I don’t need to understand it cause I love it.

What type of music do you listen to when riding or when you’re just riding?
Lots of different stuff. I’m all over the place with music. Girl rock and roll bands are good for multiple reasons.

Where do you see flatland headed in the year 2009?
I don’t know. Lots of pumping and people riding with there shirts off when it’s not really that hot.

If you could change one thing about BMX what would it be and why?
Absolutely nothing.

Can you give us a little insight on what it was like making your videos?
A lot of e-mails, your computer crashes a couple of times, you can’t get this PAL format to convert over, for some reason there is a big black bar at the bottom of some footage, countless trips to the post office, people burn your DVDs after all your hard work, people bitch about the music, some riders who said they were going to be in the video end up not in the video, some people you did not plan on being in the video end up in the video, everything is a complete mess but somehow it all comes together.

What are you into, web videos or actual DVD’s?
Web videos are cool, but a DVD always comes out better. More work goes into a DVD and I can sit on my couch and eat dinner while watching it.

What are some of your favorite BMX videos?
Baco Videos, Infinite Pieces, Building the Underground, Props has made a bunch of good videos, and Simon’s (O’Brien) solo DVD. Anything with good riding and a variety of footage is good.

The website or blog that you run is pretty awesome, what is your main goal behind it?
No goal. Just random stuff about flatland and life. www.samethingdaily.blogspot.com

Do you have any more news about Same Thing Daily 2?
Yeah it’s going to happen. I’m in the process now of filming a Props Bio, so my efforts for Same Thing Daily are on hold right now. Hopefully early 2010 something will surface.

Any shout outs?
Catfish and DK Bicycles thank you for your continued support of my riding. All my friends in Athens, all my friends I grew up riding with who are now scattered throughout the US and the world, and my parents for being awesome.

Anything else you would like to say?
Keep it chill.