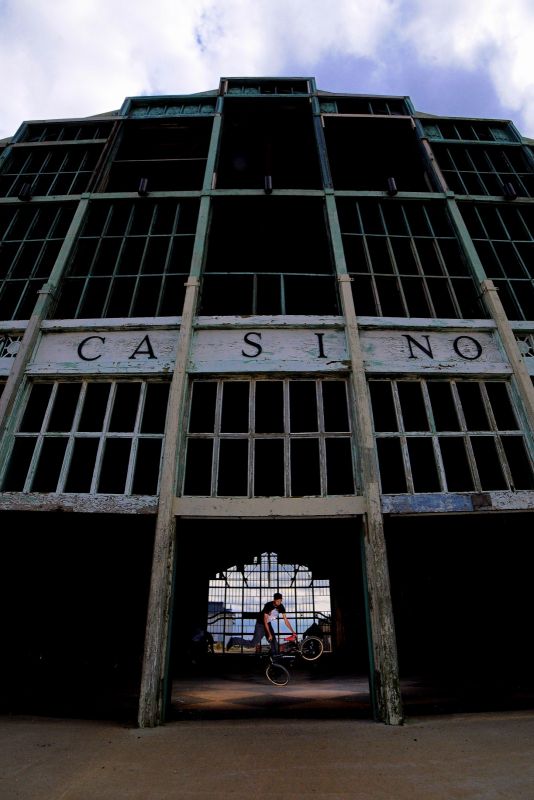 April 17th, a day I had been waiting for. Something great was going to happen down in Asbury Park. A great flatland jam was set to happen and an after party at the Wonder Bar.

Wrong. Arriving to the jam spot, I noticed that there was a bunch of people running throughout the boardwalk and the surrounding areas. I met up with Jon, Jon’s lady friend, Buddy, Kool-Aide, and Brett.

And what do you know; the gates are locked to where we were promised to have a spot to ride. Awesome.

However, it was still rather early in the morning, so we all kept optimistic about the situation. Oh, did I mention it was about 45 degrees outside?

We decided to take a ride down to Mookie’s shop, Brielle Cyclery. Where we talked with Mookie about possibly having the jam inside his store, which is pretty big by the way and we should have a small jam in there one day.

Mookie told us about the fundraiser that was going on was for kids with special needs and they had permission to use the old Casino to run through. However, we were told that we could have permission to ride there.Things weren’t looking too great.

Mookie proceeded to tell us there was a nice parking lot alllllllll the way down the street that was chained off, so no cars would be coming in or out. Brett and I pedaled down there and the parking lot was like riding in a sandbox, mixed with rocks and other garbage. So, that was out of the question.

Eventually we just decided to jam in this tiny pavement part that was attached to the old carousel. After about a half hour session, the wind started to pick up and the guys from Long Island came through. The crew consisted of Will, Lou, Ryan, and Eric.

Eric was pulling some crazy, and I mean crazy, back wheel stuff. Will was doing some wild front wheel tricks and getting used to his old frame. Lou was doing some pretty cool mega spins and Ryan was working on his foot jam whips.The session was starting to get crazy. I actually laid my bike down and dozed off, because I was up late the night before working on school work and then woke up early to be at school the next day. However, before I dozed off, I witnessed some cool stuff.

After maybe another hour or so, Sunny and Rosie from southJersey showed up to ride, which is always a treat. Sunny and Rosie got right to it and were throwing done some hard stuff. Also, the legendary John Ortiz came through.

Sunny also loves filming, so he brought out some of his gear and was filming quite a bit. After a while the session started to die down and I finally woke up. Still feeling groggy I realized that the Casino was now vacant and we could ride in there, even though it wasn’t the best place to ride.

Brett went back and got his broom and started to sweep up all the dust and sand and whatever else had accumulated there during the winter. Eric noticed there was a nice little slab on concrete in there and decided to dust that off.

Once that was finished, Eric, Ryan, and I started sessioning that little concrete slab, hard. While we were sessioning it, Jon was taking some photos, which you will see after the story. Eric pulled, I think, his first stubble duck and he was so happy.

Ryan, on the other hand, was pulling foot jam whips for the rest of the session, just one after another. It was awesome to see him pull it. I think I was the only who saw him pull it so many times.

Rosie was straight killing it the whole time, basically using the whole entire Casino as his battlefield. He was doing some crazy rolling combo’s. I love those halfpacker to backpacker combos he does. So smooth.Even towards the end he was busting out some old school tricks for the new school kids.

Keith finally showed up halfway through the jam. And he got busy right away with his hang fives and steamrollers.  He also was pulling some whiplashes and was working on this cool switch handed steamroller ride in. Good to see his progression.

Buddy, who was generally pissed off about the whole thing with Mookie not securing us a spot to ride was pretty much in his own world and just straight killing it with his smooth combos. Brett was also really bummed about us not having a legitimate spot to ride that day. So, he was rarely riding but he was still messing around with his back wheel tricks.

Almost toward the end of the jam, Willie Smith showed up and was busting out some sweet long rolling combos and super super fast timemachines.

Usually when there is a jam, you don’t do tricks that other people have thought of, right in front of their face. Or even attempt to steal tricks from others. However, Sunny and I decided to battle each other with this trick, which was his idea, time machine to mega spin back to time machine.

We must’ve gone back and forth for at least a half hour. He even had his camera set up filming the whole thing. And at one point Sunny was stepping up to a time machine and got his face smashed into the colorful wall. It was funny.

After what seemed like forever, I finally pulled it, first. Sunny was pissed because he found out I landed it on film, without him even knowing. Haha, it was awesome. Sorry to steal your link Sunny!!

After that, the session started to wind down and I said my goodbyes and went to find food. It was a good time, even though we had a badspot to ride, I was just happy to be riding my bike.

(Editor’s note: Mookie, Bud, Jon, Keith, Myself and the rest of the BMXNJ crew are working on some good stuff for the coming winter months. The next big jam for NJ will be hella…well as long as we don’t have a HUGE snowstorm…)