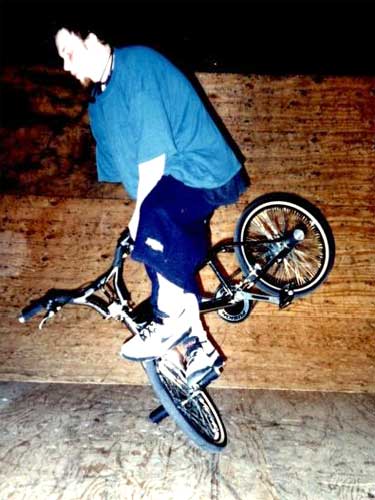 When did you ride?

Who were you riding with?

How long have you been a bike mechanic?

Who were your influences?

All the same people I mentioned early   and the plywood hoods

What are some of the craziest memories you have associated with freestyle?

To many. but the trip to chicago with adam , jim , and p.a crew was pretty crazyAny contest we all went to those were crazy

If you could change any aspect of BMX/Freestyle what would it be?

Make it kid friendly .Let the young guys learn on their own to grow the sport not us telling them how it should be. Times  will only change  nothing ever stays the same

Are we headed for another BMX recession?

How do you feel about flatland being excluded from the Xgames?

Do you think that flatland will disappear, as did freestyle skating?

Only disapeared in the spot light people still do it and you can just branch off to a differnt style like  street has become . street has such a flat feel to it now

Any last thoughts? Special thanks?
Thanks to all that ever rode a 20 inch bike and still do  I still ride just not as much it is fun to get out and mess around we all should do that  . That itself would bring change and positive light to the sport.